NeomVisions DISCOVER THE ART OF PUBLISHING
Home Storm Tracker 30% Yellow Circle in the Atlantic. WAVE TRAIN Early But Active Off of Africa. Tropical Moisture Feed in GOM Into Texas & Louisiana.

Two things to talk about briefly this morning, just to touch base on the tropics today. There is a 30% yellow circle in the Atlantic that is the area I mentioned last week that long term models had been showing as a possible subtropical sort of Low. This region off the East Coast often produces “subtropical” storms early in the season …. and even more often yellow circles and Invests that do not develop. It’s not of a tropical nature but it takes up a large part of the watery real estate in the Atlantic. Also notice that the high for now holds strongly in place over the Southeast and the adjacent Gulf of Mexico. 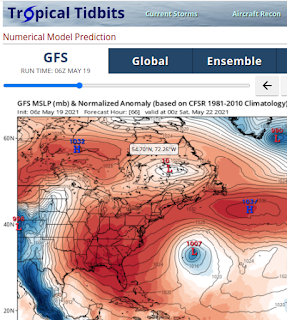 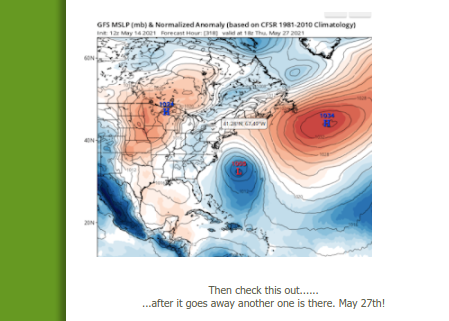 While I was less sure on the GOM possibility.

The Atlantic ‘low” of some kind seemed plausible.

That brings us to where we are today.

Again the high pressure clamped down over the Southeast and the Gulf of Mexico, however the low pressure the models had been pointing to is trying to form. Again we are not talking tropical but it’s something to monitor.

Link to that blog shown above is below. It was from May 14th.

This time of year you monitor stalled out fronts and areas that remain over time such as the area of convection near Texas/Louisiana currently and areas of non tropical spin in the open waters of the Atlantic.

Again the tropical moisture flow is ON…

Moisture from the Gulf of Mexico is being fed from the Caribbean and you can make out the remnants of the old front. To the Southeast…bottom right corner you can see how strong that one wave is in the ITCZ as we used to call it back when… it’s a convergence zone. If that wave that shows up bright pink in the orange was further to the North and this was late June we’d be talking names. But for now it’s a wave train and it’s impressive…. note it continues into the Eastern Pacific. Saharan Dust is currently taking up residence where waves form later in the season… but it’s not impossible for a strong tropical wave to come alive after longitude 55 West especially if it climbs. It would be really, really rare but since it’s the 2020s I”m pointing it out.

You know the drill… Hurricane Season is officially 13 days away and the NHC is already issuing Tropical Weather Updates and there is a yellow circle in the Atlantic so do not let an early start to the 2021 Hurricane Season take you by surprise. Invest in inexpensive supplies now before things get even more expensive than they already are…. and hopefully this gas mess will resolve before anyone has to think on evacuating and driving out of town on an expressway at a time when gas is hard to find. One problem at a time for now and your priority now is making a plan, a back up plan and stocking up on hurricane supplies.

What we don’t usually monitor is African Wave Trains. That’s a Noun in this case though it’s a noun in action moving westbound in cycles. Tropical Waves are sort of like mini systems within an overall area of deep convection. But they are cells of self contained moisture that on occasion do produce low pressure and can develop though…….. really rare to have that happen in May let alone June. But, since the 2020s have been so random weather wise we are going to monitor them.  They are too low to develop into anything as waves need to climb up above 7 North closer to 10 to really get there spin going, but seeing a whole bevy of early contenders is a bit unnerving.