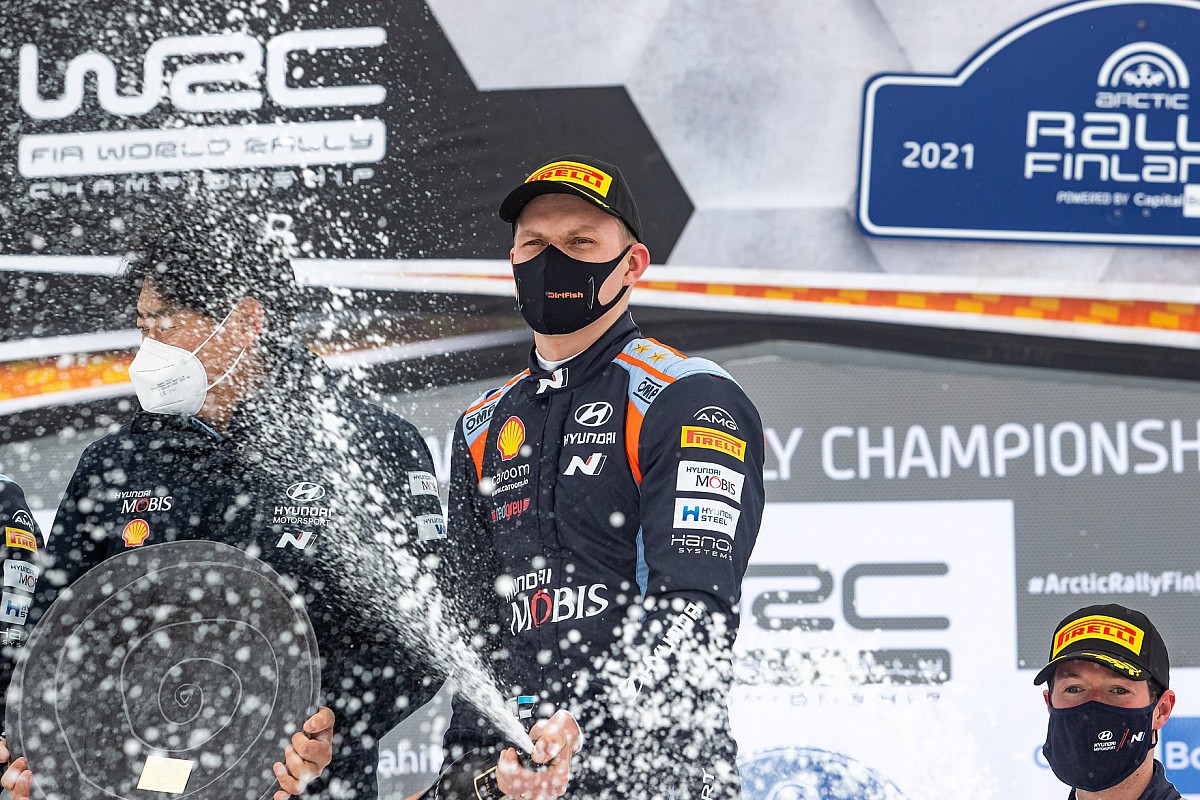 The final day consisted of two passes through the 22.47 km Aittajarvi stage and Toyota claimed a 1-2 on its morning run as Elfyn Evans claimed his second stage win of the event from Rovanpera, with the Hyundai of Thierry Neuville just 0.1s behind in third.

The battle between Rovanpera and Neuville for second place on the rally would also determine the provisional championship lead. The points leader coming into the Lapland-based rally was defending title holder Sebastien Ogier, who had battled an unfavourable road position throughout the event, and restarted on Sunday after crashing out at the flying finish of Saturday’s final stage.

The Frenchman’s only objective was to rescue some points from the Powerstage and he duly treated the world to a textbook performance on the ragged edge. Ogier’s time was almost 11 seconds faster than his morning run, but this provisional fastest time was something at which the rest of the field took aim.

The first to challenge Ogier was teenager Oliver Solberg, in his first appearance at the wheel of a pukka WRC car for Hyundai. Solberg threw everything at the wall – literally – his Hyundai pinballing between the snow banks and, almost inevitably, he ended up going off and dropping 15 seconds.

Evans was next through and he fell short of matching Ogier’s pace but then Irishman Craig Breen put on a display of fantastically controlled aggression for Hyundai to set a new benchmark, 1.5s faster than the Frenchman. Breen had been frustrated in his first WRC outing since finishing second on last year’s Rally Estonia, and he survived a scare early in the day after the team was forced to take out and replace his gearbox in order to cure an overnight oil leak.

The engineers delivered the repair with just seconds to spare and Breen’s increase in tempo on Sunday was impressive – although it inadvertently put a spanner in the works for team-mate Neuville in his battle with Rovanpera. In the end, Neuville was short of Breen’s time by 0.1s and then Rovanpera sliced across the finish line fastest of all, beating Breen by 0.2s to secure the championship lead.

In contrast, rally leader Tanak took a more measured approach to set the fourth fastest time through the stage, adding two bonus points to the 25 that he won for the event overall.

“You know first when you come to a new event you never know what to expect,” said Tanak. “This weekend we came to Finland, kind of home country of Toyota, [Gazoo Racing WRT has a base in Finland] and also Rovanpera was expected to be very strong so the pressure was there for sure and then we knew it’s going to be very complicated to take the fight. But in the end I think we did a very good weekend… just enough and nothing too much.”

Having failed to score on the opening round in Monte Carlo, the 27 points that Tanak took away from the Arctic Rally boosts him back into fifth in the drivers’ championship and helped to halve Hyundai’s deficit to Toyota in the manufacturers’ points.

New championship leader Rovanpera expressed satisfaction with the result, albeit tinged with frustration after struggling with his setup earlier in the rally.

“This weekend I wanted to fight for top place and I made a mistake and it was not in the optimum pace,” he said. “But I have to say I was pushing the whole weekend, maximum all the time, I think it was a good weekend from my side.”

Before the prizegiving, a minute’s silence was held in memory of 1983 world champion Hannu Mikkola, with an F-18 Hornet from the Finnish Air Force flying overhead in an emotional tribute led by his former co-driver, FIA president Jean Todt, and his former team-mate, FIA Women in Motorsport president Michele Mouton.

In WRC2, Esapekka Lappi completed his dominant return to competition with victory. Not only did he remind the world of his fierce competitiveness as a driver but also just how good Volkswagen’s now-abandoned rally cars are.

It was, relatively speaking, a disaster for Andreas Mikkelsen after his bullish start to the season in Monte Carlo. Mikkelsen came out of the gates of his WRC2 campaign in Monte Carlo declaring that intended to dominate each event to prove his worthiness of a top WRC car in 2022.

The Norwegian put a positive spin on being forced to settle for taking decent points from second place, but fellow countryman Mads Ostberg, who will himself return to defend his WRC2 crown later this year, was cheekily merciless in ribbing Mikkelsen from the commentary box.

In WRC3, Finnish driver Teemu Asunmaa and his Estonian rival Egon Kaur held station in the top two positions, as they had throughout the rally, with another Finn, Mikko Heikkila, completing the podium.

Having completed their winter running in Monte Carlo and Finland, the WRC teams now prepare for the debut of Rally Croatia on the WRC schedule on 22-25 April.

Alex Morris From The Science Of Hitting Discusses Spotify

Five years ago, I met art historian Gisela Gueiros when her family moved into our old apartment. One of the first things I...
Read more