If you’ve been following LTYG for a while, you’re probably already familiar with what an elemental diet is and how it can be used for bowel rest to help promote gut healing.

Consuming Broth With An Elemental Diet

Today I want to talk to you about the powerful combo of healing broths and an elemental diet, as they both offer tremendous benefits – but when used together, they can help to hit ALL angles while trying to heal the gut.

In her book, The IBD Remission Diet, Jini says:

“I strongly advocate that people drink meat and vegetable broths in between the Absorb Plus shakes on the Diet. This is largely due to the amazing health benefits of homemade bone broths. But it also serves to stimulate the appetite: If you just consume sweet tastes all the time, you’ll hit satiety quite quickly and just not be able to face the thought of yet another shake!

However, if you alternate sweet and salty tastes, this keeps the appetite stimulated and makes it much easier to consume the number of calories you need each day from the Absorb Plus elemental diet shakes.”

If you’ve read her book and used bone broth with Absorb Plus shakes, then you know exactly what Jini means about “stimulating the appetite,” as the sweetness of shakes can be A LOT when it’s the only thing you’re consuming. I personally love bone and veggie broths, and it definitely helped me to switch between broths and shakes when I was on the elemental diet myself.

Bone/Veggie broth is beneficial because:

Since bone broth is high in glycine, it encourages your body to produce glutathione, an incredibly powerful antioxidant. It’s generally reused and recycled by our bodies, but if a poor diet or other health conditions are present, it can become scarce and can’t detoxify our bodies properly.

By supplementing your diet with bone broth while simultaneously ridding your body of foods that could create inflammation, you’re giving glutathione the best possible environment to thrive and do its magic.

As Sally Fallon writes in her article Broth is Beautiful:

“When broth is cooled, it congeals due to the presence of gelatin. The use of gelatin as a therapeutic agent goes back to the ancient Chinese. Gelatin was probably the first functional food, dating from the invention of the “digester” by the Frenchman Papin in 1682. Papin’s digester consisted of an apparatus for cooking bones or meat with steam to extract the gelatin. Just as vitamins occupy the center of the stage in nutritional investigations today, so two hundred years ago gelatin held a position in the forefront of food research.

Gelatin was universally acclaimed as the most nutritious foodstuff particularly by the French, who were seeking ways to feed their armies and vast numbers of homeless in Paris and other cities. The French were the leaders in gelatin research, which continued up to the 1950s. Although gelatin is not a complete protein, containing only the amino acids arginine and glycine in large amounts, it acts as a protein sparer, helping the poor stretch a few morsels of meat into a complete meal. During the siege of Paris, when vegetables and meat were scarce, a doctor named Guerard put his patients on gelatin bouillon with some added fat and they survived in good health.

Gelatin was found to be useful in the treatment of a long list of diseases including peptic ulcers, tuberculosis, diabetes, muscle diseases, infectious diseases, jaundice, and cancer. Babies had fewer digestive problems when gelatin was added to their milk. The American researcher Francis Pottenger pointed out that as gelatin is a hydrophilic colloid, which means that it attracts and holds liquids, it facilitates digestion by attracting digestive juices to food in the gut. Even the epicures recognized that broth-based soup did more than please the taste buds. “Soup is a healthy, light, nourishing food” said Brillant-Savarin, “good for all of humanity; it pleases the stomach, stimulates the appetite, and prepares the digestion.”

Besides all of its health benefits, what is also brilliant about Jini’s IBD Remission protocol is that bone broth helps prepare for digestion – so your gut and body are now prepped for the shake to be digested in a way that you can fully absorb and receive the most benefits! That’s why I always consume my broth right BEFORE a meal.

Even to this day, I consume a bit before a meal to help facilitate better digestion. Sometimes, however, broth can make me ravenously hungry the whole day – so having a meal right after drinking broth can help you avoid overeating. This is what I have personally experienced, but keep this in mind when consuming in case your body reacts the same way!

Benefits of an Elemental Diet 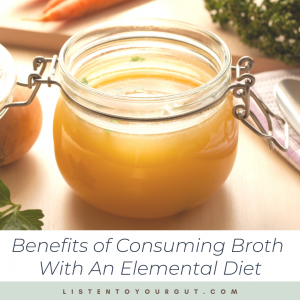 Jini likens the elemental diet to breastmilk in this video interview. Similar to when I’ve said to cook your food until it’s “baby food” in texture, you want to take your food back to basics. This allows time to heal the intestines without tearing or opening wounds with solid foods being passed through the GI tract.

The benefits I experienced when using an elemental diet:

To read more on the benefits of an elemental diet, check out Jini’s book – THE IBD REMISSION DIET. You can download Chapter 1 for free here.

Jini wrote this book in response to readers of her first book (LISTEN TO YOUR GUT), who wrote in asking for more detailed instructions on following the Bowel Rest Elemental Diet outlined in Chapter 3 of that book. It’s ideal for anyone with Crohn’s disease, ulcerative colitis, diverticulitis, or severe irritable bowel syndrome who has had enough of the drugs and surgery cycle. The IBD Remission Diet is a specialized, next-generation combination of an elemental liquid diet, with bone and veggie broths, along with tried and tested natural remedies proven to help heal the symptoms of inflammatory bowel disease (IBD)!

Both the amino acids present in broths and Absorb Plus shakes help with mucosal integrity, as well as build up beneficial microorganism growth in the intestines. Take for example just ONE of the amino acids Jini has in her AP shake: L-Glutamine. L-Glutamine is responsible for repairing the intestinal lining, and bone broth helps lower inflammation. So, if you have a bleeding ulcer or stricture, you can see why taking BOTH can be beneficial!

Now that we’ve talked about the powerful combo of Absorb Plus shakes and bone/veggie broths, and how when used together they can promote intestinal/gut healing, stimulate the appetite, and prep the body for digestion, let me give you an example elemental diet routine so that you can better implement yourself (if you choose to)!

In the IBD Remission Diet program, Jini recommends a minimum of 4-5 shakes a day for those with severe IBD symptoms to ensure they are meeting their nutritional goals. This is just a recommendation, however, as everybody is different! One person may need less shakes than another, or vise-vera. And when you first begin the diet, though, it’s best to start with even less shakes and work your way up (to ensure tolerance).

Here is a general idea of my schedule for the times I’ve been on an elemental diet. As you can see, some days I needed more calories, and some days I didn’t – it just depended on how I was feeling and what my body needed that day. I then added or subtracted shakes depending on these factors.

Jini recommends taking a probiotic dose right at bed (if you tolerate it), so you can use the 3x/a day method, or take twice and skip the dinner dose – whatever works for you.

Have fun playing around with this and see what works best for your schedule! We also have a few blog posts + a video on navigating a confusing supplement schedule, which are all fantastic:

Well, I hope this was helpful to you today! If you are currently on an elemental diet, I hope this inspires you to add these healing broths to your healing regiment. And if you’re not on an elemental diet, these broths are still extremely beneficial! And they are great for sauces, stews, soups, rice, pasta, etc. You can grab Jini’s Healing Broth Recipe eBook for FREE here – and begin incorporating these healing broths today.

Until next time – happy healing, and always listen to your gut!

Linsy is Jini’s assistant. From a highly sensitive/reactive case of Ulcerative colitis, to completely drug and surgery-free using natural methods only, Linsy really understands first-hand the interplay of the mind/body/spirit in the healing journey.