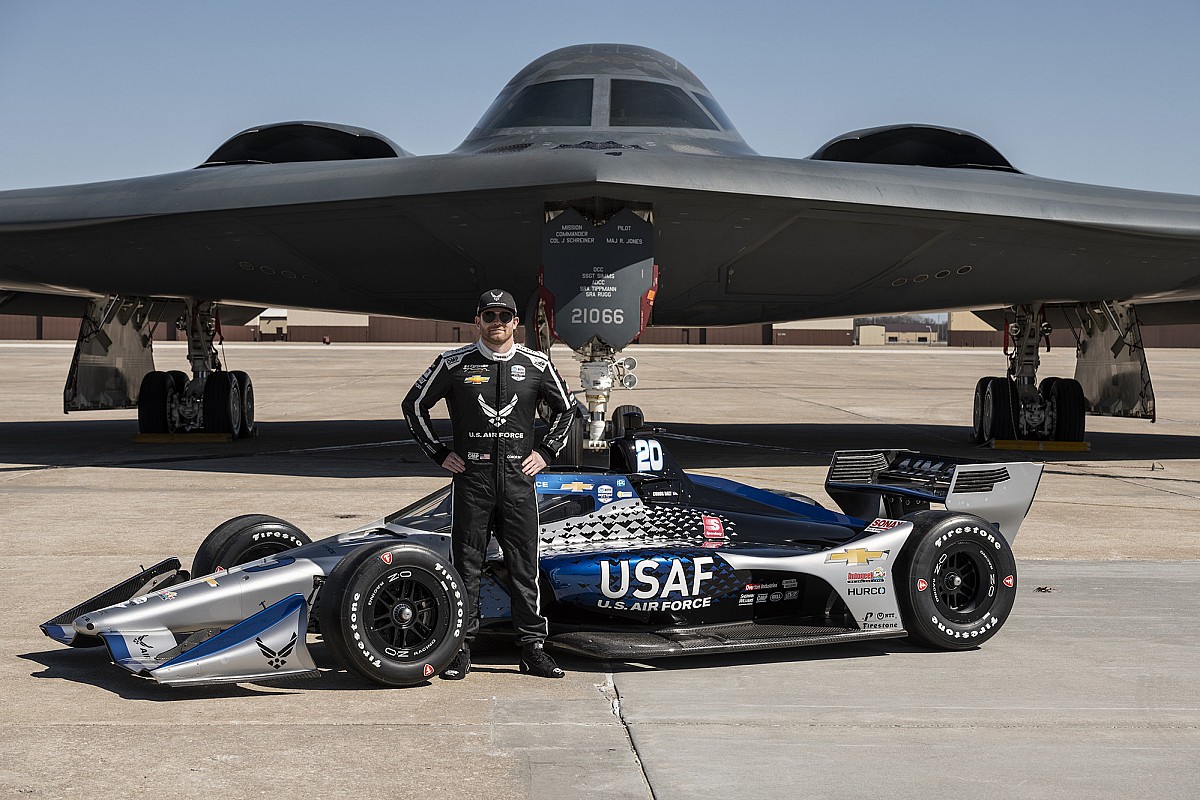 ECR and the U.S. Air Force have unveiled Daly’s colorscheme that features a pattern of silver, blue and black silhouettes of one of the world’s most distinctive planes. The B-2, which first flew in 1989, went into operational service in 1997 and first entered combat in 1999 (Kosovo) remains the only stealth bomber type in the world.

The B-2’s low-observable (stealth) characteristics are not only the result of sophisticated counter-surveillance materials and anti-reflective camouflage, but also the shape of the plane. Without a tail fin, and using a fuselage and air intakes that are more like blisters fully integrated into a vast wing, the B-2 echoes the designs that emerged from Northrop in the mid- late-1940s – the XB-35/YB-45 (piston engined) and YB-49 (jet).

A group of select Airmen from the 509th Bomb Wing were the first to see the 2021 U.S. Air Force Chevrolet two weeks ago. Daly and members of the Ed Carpenter Racing team travelled to Whiteman Air Force Base, Missouri, to meet the men and women who maintain, support and operate the aircraft, and displayed the #20 ECR-Chevy alongside a B-2.

The 509th Bomb Wing and its fleet of B-2s serve as part of the U.S. Air Force’s conventional and strategic combat force, and Whiteman AFB is the only operational base for the strategic stealth bomber.

“The Air Force’s liveries have traditionally drawn inspiration from the fighter aircraft community, but air power is about much more than fighter aircraft,” said Major Jason Wyche, Chief, National Events Branch, Air Force Recruiting Service. “The B-2 plays a critical role in the defense of our nation, bringing massive firepower to bear, anywhere in the world, in a short amount of time.

“The B-2 is an iconic aircraft, so we are really excited to unveil this design highlighting the stealth bomber and the airmen supporting that mission.”

Daly, whose partnership with the U.S. Air Force originated four years ago, last season drove the #20 U.S. Air Force Chevrolet for Ed Carpenter Racing during the road and street course events and the #47 in the Indianapolis 500, while ECR team owner Ed Carpenter raced the #20 in the NTT IndyCar Series’ other oval events.

“To be able to pay tribute to one of the most outstanding aircraft in the U.S. Air Force fleet is really incredible,” said Daly. “The B-2 Spirit represents some of the greatest technology in the modern world and some of the most impressive air power.

“For it to be on our NTT IndyCar Series car means a lot to myself and ECR. We hope it’s as powerful as the B-2! We have such incredible cars every year.

“We’ve showcased the history of the fighter jet, which is so fitting since our cars look like fighter jets. Now, we’ve got the B-2 on our car in a really cool pattern. We really hope the fans love it as much as we do.”

The B-2 car will be branded as the #47 during the open test at Indianapolis Motor Speedway on April 8-9, since that will again be Daly’s Indy 500 number. The official design of the #47 will be unveiled in April.

How Care Coordination And Support For Isolation Can Help Curb The Pandemic : Shots

Researchers at Chalmers University of Technology present a unique optical amplifier that is expected to revolutionise both space and fiber communication. The...
Read more