Staging a fashion show is daunting under normal circumstances but doing so during the shutdown opened up new possibilities for some Lynn University students.

Digital mapping, holograms and new virtual presentation techniques were a few of the workarounds that those enrolled in the fashion and retail program at the Boca Raton, Fla.-based school decided on. Scheduled for April 22, the virtual show is fittingly called “Surreal.” Even though apart, 20 students in Lynn’s fashion and retail program have spent the spring semester ironing out their plans for the upcoming show along with models and producers.

Heading up the project is Andrew Burnstine, an associate professor at the College of Business and Management. He said, “We named it that because it’s a surreal world. Nothing is like it was. The students feel that. Nothing is normal. They see that fashion isn’t normal. Even the on-ground shows have either gone virtual or are nonexistent or without audiences. The students wanted something to show what they felt.”

While several designers in the European Union have embraced the phygital for a show or presentation — Balenciaga’s Demna Gvasalia being among them — that has not yet been the case with fashion schools in the U.S. The virtual show will involve holograms, 3D mapping and other futuristic effects. It will explore four realms — Eco-Craft, Sea of Reality, Kaleidoscope and Re-Imagined.

Through an alliance with the U.K.-based app maker Beem, attendees will be able to take part in the show by hologramming in, Burnstine said.

To get a better sense of what consumers are seeking in sustainable and purposeful design, the students interviewed designers. They were also motivated by the concept of phygital, combining physical space and digital technologies. The interview clips are interspersed in “Surreal,” including some of the ultra-techie fashion designer Anouk Wipprecht. Having worked with Intel, Audi and others, the designer was recently commissioned by NASA to create a meteor dress. The interactive 3D printed dress has embedded LED lights. If there is a meteor strike anywhere in the atmosphere, the wearer’s dress will light up, Burnstine explained.

As a warm-up to the virtual show, Wipprecht will be part of an online discussion, “The Future of the Virtual Fashion Show,” on April 21. Global Fashion Business Alliance founder Beth Sobol and Dress-X’s Natalia Modenova and Daria Shapovalova will be among the other speakers.

The “Surreal” effort brings together two schools at Lynn — the College of Business and Management and the College of Communication and Design. Referring to the latter, Burnstine said, “Those professors are also artisans. They do game design, digital and so forth. The students know the fashion and marketing but they don’t know the virtual and the animation. We’ve filmed and mapped each model. We’re not calling it an avatar. But we can take her form and put it into one of the realms, where they will be modeling or showcasing whatever it is.”

The collaboration has helped the fashion and retail students glean some knowledge on the digital side, by watching the editing, virtual mapping, filming, animation and working with the photography teams. Kaleidoscope, for example, will feature images of vintage designs by Bob Mackie, Geoffrey Beene and Jeanette Kastenberg that have been photographed and mapped onto student models. As the grandson of Martha Phillips, founder of the designer boutique Martha, Burnstine retrieved some of those from his family’s foundation Private Collection Couture. A “Looney Tunes” jacket by Kastenberg and a clown outfit by Bob Mackie are among the pieces that have not been shown publicly for 30 or 40 years.

The clown outfit belonged to Burnstine, a Clown College graduate  who worked as a clown in the ’70s, including a one-year run at Ringling Bros. and Barnum & Bailey. “Bob Mackie made me a clown costume. It was incredible. One of the collars comes from an outfit that he made for Carol Burnett. There is a sleeve from Cher. He took materials from other pieces and put it on there. I had a bowler hat all done in rhinestones — you know Bob,” said Burnstine, whose clowning skills have been used to entertain former first daughter Amy Carter in the White House, and on another occasion Diana Ross and her children. Pre-COVID-19, he visited children in area hospitals as “Grandpa Giggles.”

Other circus-inspired designs by Kastenberg, Christian Francis Roth and Zang Toi that were made for a museum benefit years ago will be featured in the Kaleidoscope realm of “Surreal.” A model will also wear Burnstine’s Bob Mackie-designed multicolored clown costume with diamond-shaped tails.

As for the other realms, Eco-Craft is an eco-conscious collection that has been curated by the Smithsonian’s Women’s Committee. The Sea of Reality will reflect not only illuminating oceanographic shades, but also living, vibrant colors that we see all around us, Burnstine said. Re-Imagined will be more futuristic for a more interactive fashion experience. 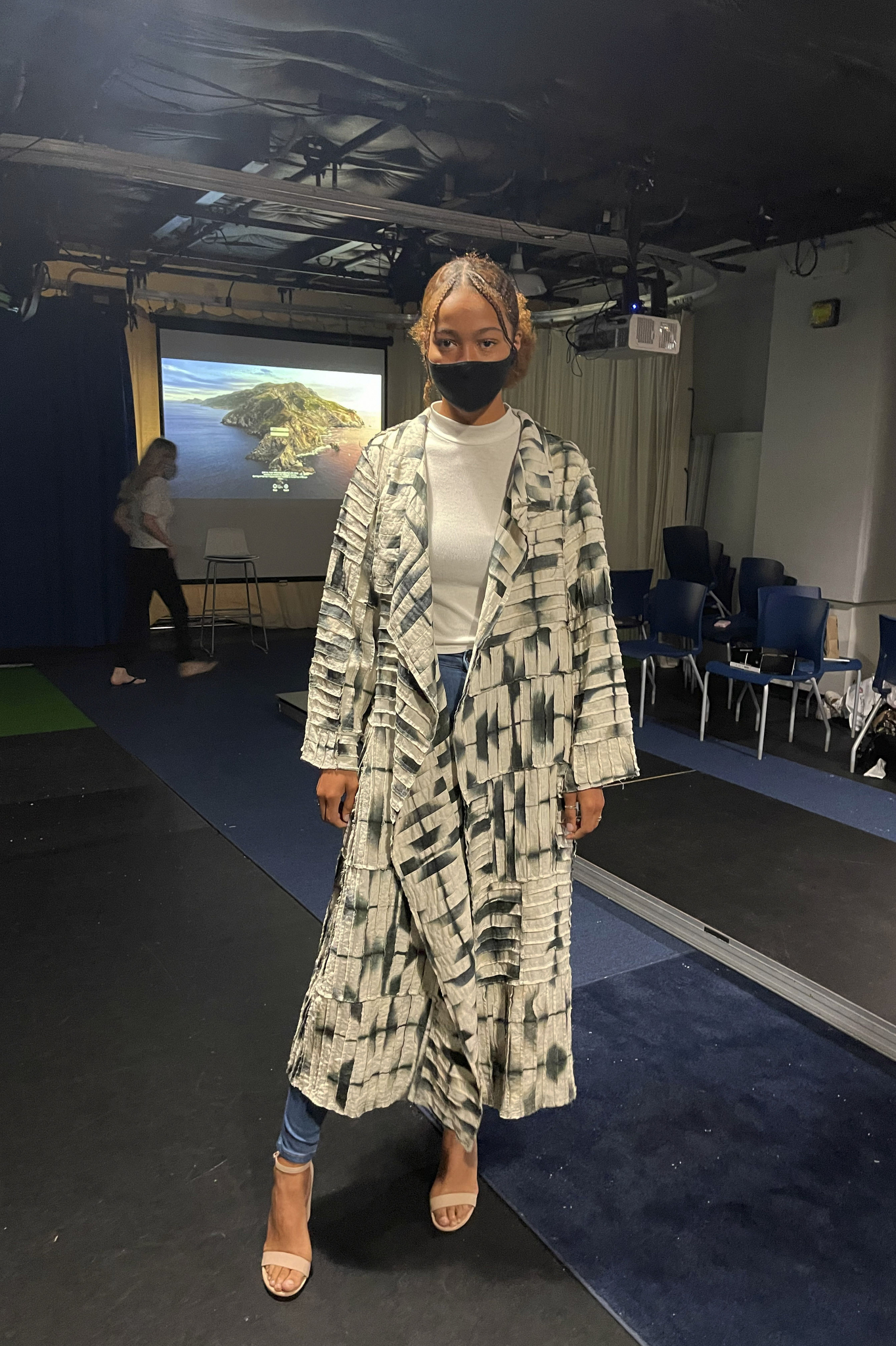 Through her ties to the Smithsonian, Burnstine’s sister Nancy Glick helped connect the Lynn team with some sustainable designers and artisans, who will be featured in the upcoming Smithsonian Craft Optimism, a show slated for April 24. Amy Nguyen is among those whose work will be featured in “Surreal,” as well as the Washington, D.C., area designer Saints Valley, who specialized in cashmere.

“Surreal” will end with “Impossible to Possible,” music from Black Violin’s Kevin Sylvester and Wilner Baptiste. Burnstine emphasized how the song’s inspirational message captured the thoughts and feelings of his students.

“Going from the impossible to the possible and getting out of COVID-19. That is what we are trying to say to the students. Even when you get back to doing an on-ground fashion show, it’s going to look different. It will be a hybrid. You will have the best of all worlds — the virtual, the phygital and obviously the on-ground,” Burnstine said. “Even though we’re going virtual and going into different realms, we’re still seeing the most wonderful fashion in the world. New fashion and vintage designers haven’t stopped creating. And our students haven’t stopped creating and imagining. We could have just done a regular fashion show production class and looked at the history of fashion students. Our students said, ‘No, we want to put on a show. We want to do this and show everybody that we can beat COVID-19. We can put on the most incredible virtual show even though we don’t know much about it.’”

Turning intentions into actions with a new wearable brain-machine interface

A new wearable brain-machine interface (BMI) system could improve the quality of life for people with motor dysfunction or paralysis, even those struggling...
Read more

How enthusiastic are you about makeup releases currently?