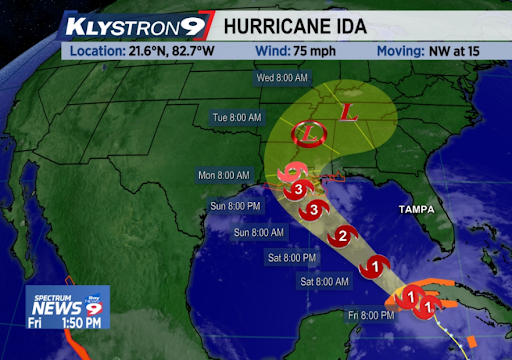 I really think Ida takes the right side of the Cone.

Or it bends just a bit more to the East.

But between now and then much will happen. 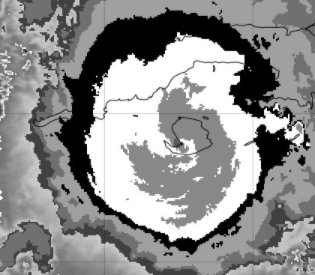 That allows it to explode and grow in size.

https://www.tropicaltidbits.com/sat/satlooper.php?region=09L&product=ir-dvorak This is the link to the Dvorak, image shown above, but you can use many other loops there as well as obviously an incredible floater.  Always watch the storm in real time as opposed to getting lost in models. Models can be perfectily aligned on one run and then one or two break from the pack. What does that mean? It means that one model vs the others sees something different as a possibility because something has changed.

What could change here with regard to the forecast? A strong Major Hurricane and this could easily be a Category 4 if not more are prone to ceate their own environment that aids them moving Northward towards the poles and protects them at the same time.  Some people carry back up batteries to charge their phones in case of emergency, you know cute ones they found at TJ Maxx on sale cheap. Other people buy those huge back up battery chargers that feel like a brick but can charge your phone for the next day or so not just for a few hours.  A Major Hurricane IDA is like that huge battery pack that feels like a brick, costs a lot of money and keeps it going way longer than a weak storm dealing with land interaction or shear and not vertically aligned.

Strong Major Hurricanes want to pull North towards the poles and what blocks them is a high to the North or blocking their movement to the NE keeping them going NW or NNW towards their target. When a front approaches they jump on board and ride the front to the East Coast. When they slow down it often means the steering currents are weakening or something has changed. High Pressure builds in to their North blocking their rapid movement or the high to the East of them begins to erode a bit as they love to trace the High.  The forecast is for the High to remain strong and that is why everyone is screaming LOUISIANA! but I’m concerned definitely on Mississippi as well as it’s neighbors to the East. Mississippi and Alabama share small narrow coastlines that slam up against the wide Florida Panhandle. 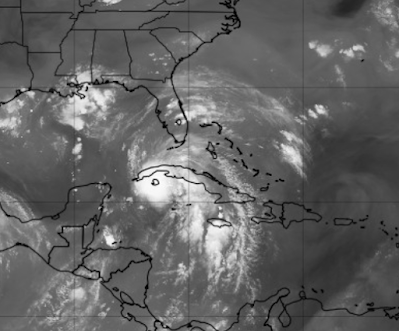 Also the strongest impacts are usually to the right of the eye with regard to storm surge especially with the type of Major Hurricane that the NHC is selling in their excellent forecasts for this intensifying hurricane. But there is always some fly in the ointment that shows up close in before landfall and what that fly may be doing I can’t say but I can feel it. Slowing down on landfall cfreates a Harvey like scenario, slowing down can mean it’s beginning to change directions more and lean more to the right at landfall due to the high eroding. Possibly the weather out ahead of helps weaken the high or possibly the huge outlow of a Cat 4 Hurricane erodes it a bit. No way of knowing this minute but IF there is an issue to deal with it will reveal itself. The forecast slowing of speed of a Hurricane that can intensify close in as many like Hurricane Michael have sone makes this particular situation a dangerous one on many levels. 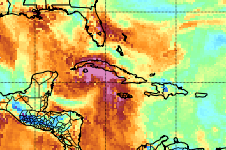 This image above shows the moisture (fuel) to Ida’s South.

It also shows much moisture to it’s North…

…again the High is forecast to build in.

There are literally lines out ahead of Ida to Nola.

Below we see the water temperatures.

Below are the current models also from the site above. 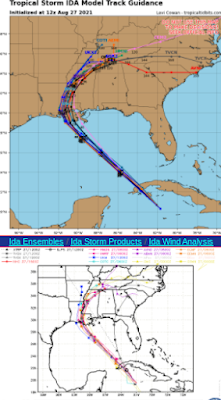 Watch the next model runs to see any changes.

So far they are tracing eachother to Louisiana.

There’s always that one wayward one. 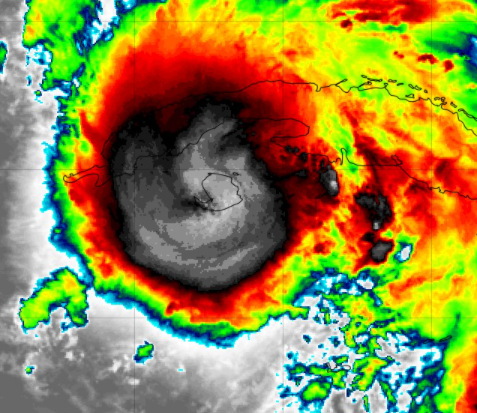 That eye is gonna pop out soon.

I’ll update after the 5 PM package. A reminder I am offline on Saturday as I keep the Jewish Sabbath (which allows me to recharge my battery) and I’ll be on Saturday evening after sundown. The NHC has been very good with this storm and any changes in intensity or track or forward speed they will deal with in real time. AGAIN……….use the NWS they are your friend. TWC can be found on ROKU as is Weather Nation. Mike at Spaghetti Models does an incredible job being live on air and talking when ever he can so use him www.spaghettimodels.com

More to come later after the 5 PM.

Everyone in the track of IDA prepare NOW.

Do what you got to do.

But know hurricanes in the N GOM often bobble a bit.

And too often they do it at landfall.

So forecasts are good but this evolves in real time.

Check back after 5 PM.

As a food industry leader that has helped feed well over...
Read more

Hotel investment and management Group, Amaris Hospitality, has announced its intention to expand operations across the UK and Europe with the appointment of...
Read more

The track was lost to rain in the final half hour of the two-hour session, at a point when Daly’s 222.714mph had...
Read more