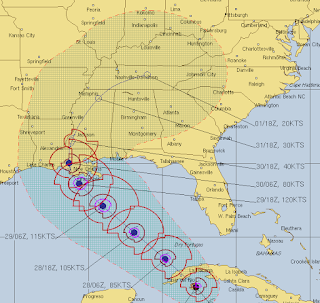 This is a cone from the NRL.

It alligns with the NHC Cone below.

But it shows wind speeds better.

And it shows areas that could get wind…

…if u are in the shaded grided area pay attention. I know it is hard to see what looks like a weak hurricane down near Cuba about to enter the Gulf of Mexico and wrap your head around the reality that it will become a probable Killer Hurricane putting millions of people in the path of danger. Despite great consistency in track from the NHC it is possible as we move into tomorrow and tomorrow night that some small change in it’s track extrapolated over time brings this to Bay St. Louis in Mississippi or even closer to Gulport and Biloxi. That is not a high probability but it’s a possibility. So far this storm has taken the right side of the cone consistently. Originally it was headed to the Mexican Texas border then Texas then the Sabine River and now the beautiful, low lying city of New Orleans is in it’s path as well as all the beauty bayou towns that stretch across the low country that is particualy prone to flooding.  Category 4 Hurricanes carry with them a huge dome of water that hits each beach a little differently and there could be localized flooding and coastal impacts all the way to the Florida Panhandle that are minimal compared to say Grand Isle but large for say Destin. Alabama will have coastal impacts and further up the coast they are in the cone as Ida hangs a right at some point and heads towards the Applachian mountains and associated foothill towns. 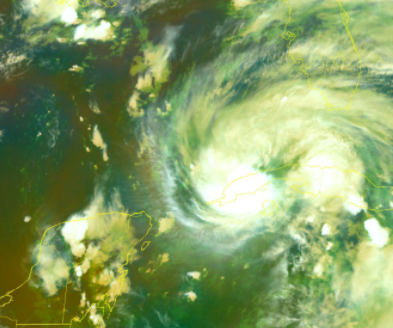 ..it is forecast by the NHC to explode.

Both in size and intensity.

So this has many moving parts and they all need to be paid attention to from landfall to far inland to everything to the right of the storm where the huge storm surge and strongest winds will pile up water and create localized flooding. Power Outages are the least of it.

There has been so much hype as it’s the anniversary of Katrina, a very different storm as it took the track across Florida and hit the Loop Eddy and made landfall where many storms do in this general region. Ida is not Katrina. Ida has a more similar track to Camille so far and looks very siimlar but it is NOT Camille it is IDA and years back we will compare other storms to this storm. It’s the way of the world.

Ignore hype if you are in the path of this storm and do what you need to survive. Luckily in a sad, sardonic way … Louisiana knows more about landfalling hurricanes than most places as they hosted way too many last season. I worry more about places further inland and to the East of Ida’s landfall that feel the storm is far away doing New Orlean and not paying attention to any last minute changes.

You can simply type in any city into Google and it gives your forecast and info. See the forecast I got by putting in “Waveland Mississippi Weather” and it tells you they have a Tropical Storm Warning. Your phone should warn you of weather events. Don’t trust some relative who heard it from a friend that heard it from a friend go right to the source with the National Hurricane Center or the National Weather Service. 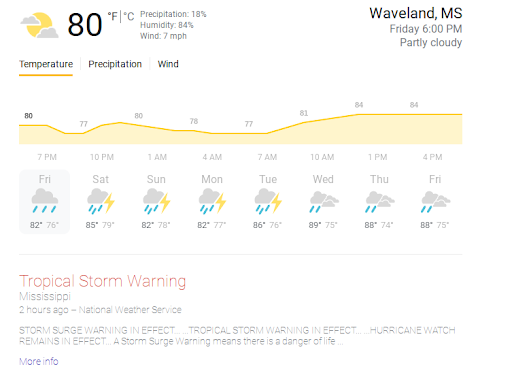 Hurricanes are one of the only Natural Disasters you can prepare for so use this time wisely. Send money to anyone who may need by CashApp or offer them a place to stay and after the storm give as much charity as you can to a reliable source.

I’ll be offline Saturday until after Sundown that’s my thing and I am going to rest up over the Sabbath as it’s pretty much the only rest I will get for days and I will pray. Maybe it helps and maybe it doesn’t but it makes me feel I am at least trying to do something other than beg you to take this hurricane seriously.

What it looks like today is not what it will look like in 24 hours. And know things often change in some minute way so nothing is locked in except it is in the Gulf of Mexico and it will make landfall within the Cone from the NHC.

Hakimi hopes to stay at Inter Milan ‘for a long time’

The Morocco international has revealed he is enjoying his stay at San Siro and would like to continue with the club ...
Read more

The reopening phase of the pandemic is long underway in most parts of the country, but fast-food operators are still struggling to...
Read more