Not your usual pairing but that’s what first lady Jill Biden wants first thing post-COVID-19, she revealed when she sat down with Kelly Clarkson at the White House in her first solo TV interview since the inauguration of President Joe Biden.

If it sounds like an unusual pairing of host and guest, think connection: Clarkson’s connection with her daytime audience of what she calls “everyday people” (her 17-month-old show has been a ratings hit), and Biden’s desire to connect with that audience to convey messages of hope and unity.

Biden even talked about her first marriage and divorce, trying to instill hope in Clarkson over her ongoing divorce woes.

As it turns out, Biden, 69, and the chatty, no-filter Clarkson, 38, seemed to get along like a house on fire judging from clips of the show released Wednesday. Clarkson made clear she approves of Biden’s post-pandemic yearning.

When Biden was asked what fun thing she planned to do first once the pandemic eased, she laughed. “A fun thing? Maybe go have a martini and some french fries.”

“Yeah!” exclaimed Clarkson. “I knew I loved you! I love that idea!”

The one-on-one “conversation” (“I don’t like the word ‘interview,'” Clarkson said) took place in the East Room earlier this week under socially distanced conditions: The two were maskless but seated far apart.

There was a serious purpose to Biden’s appearance on the show: She’s re-introducing herself (she was second lady for eight years during the Obama administration) to a country divided more than ever by politics, race and a national emergency. She’s trying to reach as many people as possible quickly to make the case for the Biden administration.

She’s using every tool she has, from her FLOTUS megaphone to her dogs, Champ and Major, to connect.

Besides, the Texas-born Clarkson got elected, too: She was voted the first American Idol.

Biden talked to Clarkson about her FLOTUS agenda advocating for education (her paid job is teaching English literature at a community college in Northern Virginia), military families and cancer research. 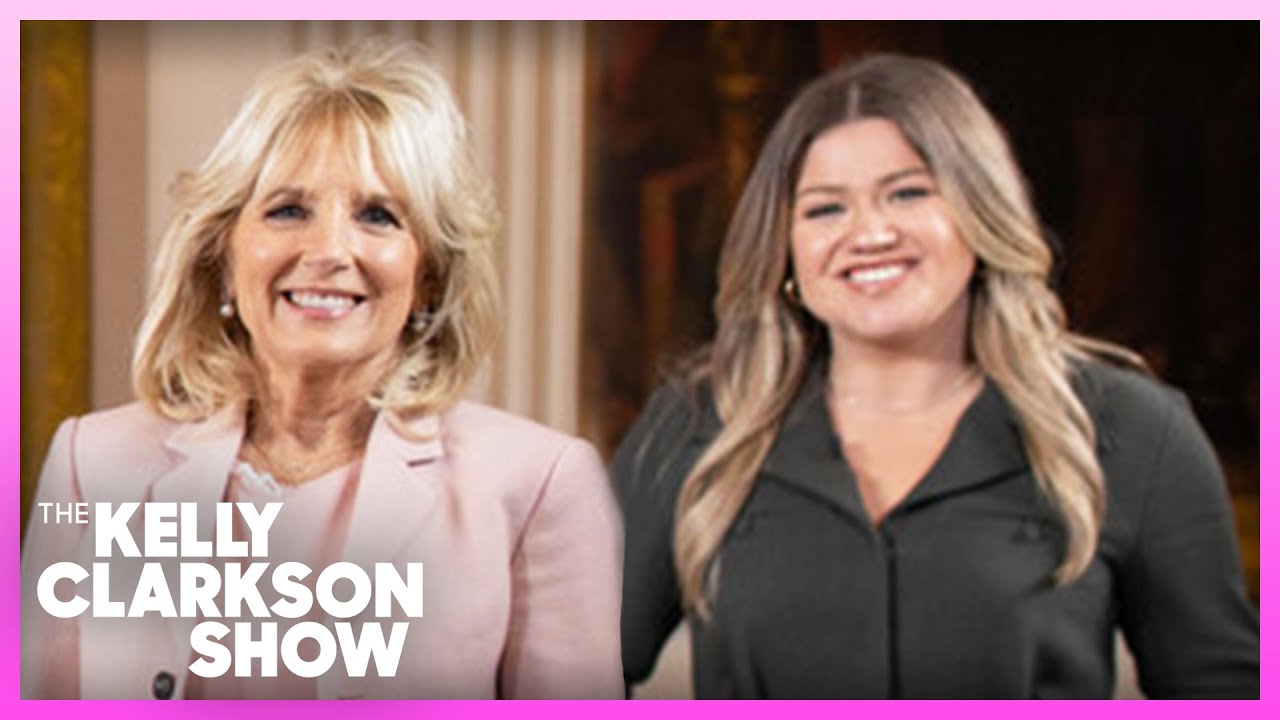 (On Wednesday, she traveled to Virginia Commonwealth University’s Massey Cancer Center in Richmond, Virginia, for her first public trip outside Washington. She “it’s about time” the country got serious about ending longstanding health inequities for people of color.)

On the Clarkson show, she took questions from a live virtual audience of past show guests, commented on Clarkson’s choice of song for her opening “Kellyoke” segment (her version of karaoke), and offered her tip for what women should do first every day (exercise).

She even counseled Clarkson on the possible upside of a divorce. Biden was married while in college and divorced before she married then-U.S. Senator Joe Biden, a widower, in 1977.

Clarkson filed for divorce from husband/manager Brandon Blackstock last summer and is still in the throes of dismantling their personal and professional relationships. She has primary custody of their two small children, and she’s been open about the emotional and psychological pain of divorce.

Biden talked to Clarkson as if she were her mother, quoting her own mother’s advice about how things always look better tomorrow.

“If you can take one day at a time, things will get better,” Biden said. “I look back on it now, and I think if I hadn’t got divorced I never would have met Joe and I wouldn’t have the beautiful family I have now. So I really think things happen for the best.

“Kelly, over time you heal and you’re going to be surprised and I can’t wait until that day comes for you,” she said.

A system used by European countries to report outbreaks saw the number of requests fall in 2020 compared to the year before. The European...
Read more

Assessing soil health by measuring the electric current produced by its tiniest microbes?

Spring is in full bloom and so are the sales. One we’re particularly excited about is Our Place’s biggest discount of the season...
Read more