This is the most exciting National Sandwich Day ever. Oh, and it’s SOS Day. Oh ok… and I suppose it’s Election Day in the US too.

Hurricane Eta made landfall this afternoon (local time) just south of Puerto Cabezas, Nicaragua, with winds of around 140mph, central pressure of 940mb, which means it was a mid-size cat 4 storm (cat 4 range: 130-156mph). It took longer to get to land than expected because it slowed down to 4mph in the hours before landfall, which means that the coastal areas were experiencing a cat 4 storm for many many hours – that’s a big mess! 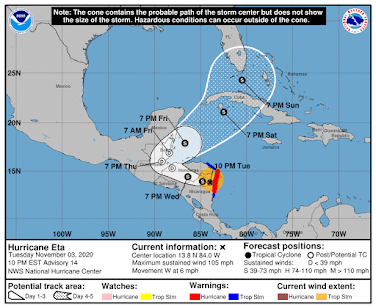 We’ll see how it survives over land for the next day or so before looking at the longer term forecast above.

Winds are still 105mph, central pressure is 970mb, which still means this is a hurricane – a cat 2 storm – even though it’s been over land for almost 12 hours now.  I agree with the hurricane status of this storm – there is still a lot of vorticity in all levels of the troposphere so the structure is really robust. Now it’s been over land, the convection has decreased quite a lot, but there is still a lot of wind and some convection:

Just like the US election tonight, it’s too soon to get any reports out and find out what the situation on the ground is there. So, I suppose there will be more tomorrow!

DISCLAIMER:
These remarks are just what I think/see regarding tropical storms – not the opinion of any organization I represent. If you are making an evacuation decision, please heed your local emergency management and the National Hurricane Center’s official forecast and local weather service announcements. This is not an official forecast. If I “run away, run away” (Monty Python), I’ll let you know.
————————————–