A bit late in the day here because I was doing research for my future best-seller: ‘Grocery Shopping in the Time of Covid”. The good news is I have re-stocked on ice cream.

Grace is currently at 19.8N, 85.6W and is heading W at 18mph. Her track is pretty much within yesterday’s Cone of Uncertainty and she will be making landfall in the Yucatan Peninsula tomorrow (Thursday): 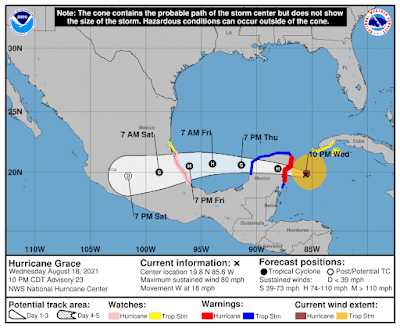 It will take her only a hours to cross the peninsula, but it should be enough to weaken her, so I agree with the NHC that she will be a Tropical Storm as she emerges. However, the waters are rather warm in the Bay of Campeche and I also agree with them that she will re-intensify out there.

At the moment she is officially a weak-to-mid-size cat 1 hurricane with winds of 80mph, central pressure 988mb (cat 1 range: 74-95mph). Although she’s on the large side if you measure from cloud-edge to cloud-edge, the bulk of the really rough weather (rain, thunder, tornadoes etc) is confined to a much smaller region (comparatively):

She is going over some of the warmest waters of the Caribbean, but the reason she’s not much stronger is because of the atmosphere. There is some wind shear, which you can see as the clouds stream off to the east. But, more importantly, there is some dry air in the lower levels of the atmosphere which are being pulled into the system. Here is the lower level water vapor satellite imagery:

The yellow areas in this are dry air and you can see the storm itself with the dry air on the western side. It’s a battle between the ocean and atmosphere going on here. I don’t think that she will intensify much more before (her first) landfall, and may actually weaken as there is also the influence of land to add to the dry air and wind shear.

Henri is at 29.8N, 68.5W heading W at 9mph. He’ll continue on this track for another day or so before turning to the north on Friday: 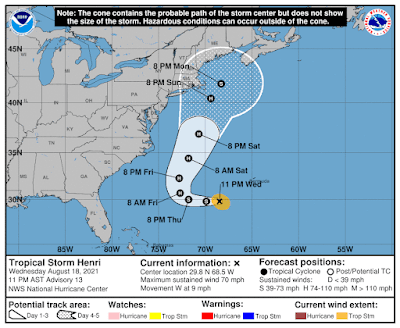 He is officially a very strong Tropical Storm with winds of 70mph, central pressure of 995mb (TS range: 39-73mph), and looking at the vorticity maps, I would agree with this. He has good circulation in the lower half of the troposphere, but it isn’t quite as robust in the upper half yet (which would mean he’s a fully fledged hurricane). This is the vorticity map from the highest level (250mb):

You can see the difference in the vorticity signal for Grace compared to Henri – she has a signal that is more-or-less where she is, but his is part of a broader ripple. His convection was quite extensive earlier today, but it has diminished since then:

In his case, there is less wind shear at the moment (although he may be heading into a patch tomorrow), but he is also heading into some drier air at all levels of the atmosphere – not just the lower levels. Here’s the water vapor imagery from the upper levels:

In this case the dark purple is dry and green is rather not dry.

Meanwhile, in the Pacific, Linda is at 19.2N, 134.7W and is heading WNW at 16mph. Her track is to the north of the Hawaiian islands, but for now, I would keep an eye on that cone and not the center line just to be prepared (get the umbrellas dusted etc): 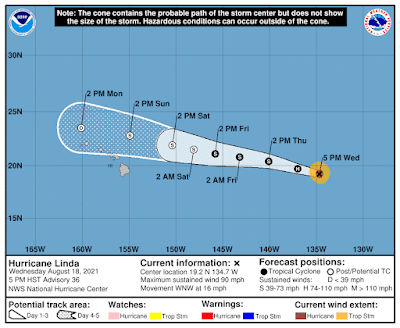 She has definitely weakened and is now officially a strong cat 1 storm with winds of 90mph, central pressure 980mb. Although there is no wind shear, she is moving into some drier air and also over some cooler waters now (which is why she is decreasing in intensity) and that will continue, so she won’t be a hurricane as she approaches the islands and may just result in a wet weekend (depending on track). I think she may be a little weaker than the official estimate because her circulation is not as strong in the upper levels of the troposphere – Grace is actually stronger.

Dan Dakich has spent most of his time as a college basketball media member doing two things: a) arguing that unpaid...
Read more

The Lasting Impact of ‘High on the Hog’

The format may feel familiar to fans of other Netflix food shows, but make no mistake, High on the Hog is doing...
Read more

This L.A. Show Is Ready to Reignite the Design Scene

Remember buzz? Remember being excited about going out to see something new, live and in the flesh? The world may not be fully...
Read more