Well, my friends, Ida pulled herself together pretty quickly today, didn’t she? Just in time for the weekend. So…

She is currently at 23N, 84W, heading NW at 15mph and is crossing Cuba a little to the east of the track that they estimated yesterday, which is as expected. However, the track for the next couple of days continues to take her towards the central northern Gulf (as I’m sure everyone around the Gulf knows by now!):

At the moment, I don’t see any reason not to go with the NHC track  – I would still be prepared along the entire northern Gulf coast between TX and Apalachicola, FL. Especially as her rainfall and thundery weather stretches over quite a large area.

She is currently a weak Cat 1 hurricane with winds of 80mph, central pressure of 989mb (Cat 1 range: 74-95mph). She has got quite a lot of convection still, although we can see that Cuba really helped to take some of that out of her:

There is also some wind shear, which we see from the clouds streaming to the east, however that looks like it will decrease in the Gulf. The NHC are forecasting a major cat 4 hurricane to make landfall late Sunday/early Monday. If she stays on the forecast track, then a strong hurricane is possible. The factors that are controlling her intensity in the Gulf are:

1. Low wind shear over the Gulf.

2. The air has a lot of water vapour ahead of her, although not at all levels of the atmosphere. In the upper layers of the troposphere, there isn’t any dry air (dark purple). This water vapour is a factor in helping her to intensify:

But there is some drier air (yellow parts) in the lower levels of the atmosphere, which you can see in the satellite image below and is part of the reason that her convection is not as robust as it was when she was crossing Cuba:

If that dry air continues, then her intensification will be slow. But there is a lot of convection so I am not sure it will continue to inhibit her for much longer.

3. But the biggest reason why they are thinking she will intensify quickly is because not only are the Gulf sea surface temperatures warmer than 28 deg C, the path she is forecast to take means that she will pass directly over the Loop Current over the next 2 days. The Loop Current is part of the Gulf Stream system and has a lot of deep warm water. This means that as she churns up the water underneath her, she is bringing up more warm water which keeps feeding her and helps her to intensify. A map of the depth of the 26 deg C and warmer water is here… 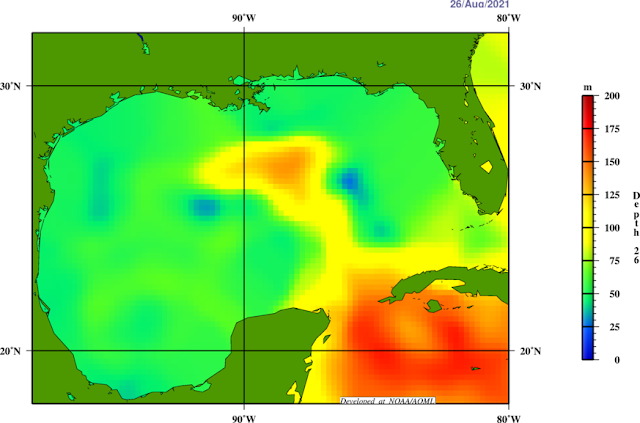 If you overlay the track path, you can see that she is projected to go over the deeper warm water all the way into the northern Gulf (yellow means water warmer than 26 deg C is in the upper 100m of the water column, and red means that warm water is in the upper 125-150m). If she doesn’t go over the yellow or red areas, there is a chance she will not intensify as much as they think and if she goes over those very small blue patches, then she will definitely not intensify as much.

So… in short, the intensity crucially depends on the path she actually takes.

As I thought yesterday, again at the moment it looks to me as though her center of circulation from the satellite imagery is a little to the east/north of the center in the Cone of Uncertainty, which means she may be weaker because of that low level drier air, but also because she’s actually currently moving along the edge of the area where the warm water is shallow (the green part of the map above). We will know the location of the center more accurately when the planes return the latest data, but the models are still taking this storm to the Louisiana region and they have been quite steady on that track.

I do agree with the NHC that she is a hurricane at the moment because there is strong circulation in all levels of the troposphere, including the upper levels – a sure sign of a hurricane. And I also agree that she’s a weak cat 1 because there isn’t any clear eye (which starts to appear around 90 mph or higher).

For those of you in the Cone of Uncertainty, I hope you are ready! Above everything, please heed the advice of your local emergency managers – they have the most up-to-date information on what is happening in your area. Also, a general note to remember to “run from the water, hide from the wind”. This means that if you are in a flood zone, then definitely move to higher ground because most fatalities in hurricanes are related to water rather than wind. If you are in an area that is not prone to flooding, find a place away from windows and hunker down. However, if it was a cat 4 or higher and it was me, I would evacuate if I could.

There are still two more areas to watch in the Atlantic:

You can see them both in the satellite image above. The most likely to become TS Julian is the one to the south – due east of the Lesser Antilles. He has recently gained a lot of convection – he was inhibited by dry air until now. His circulation is fairly good in the lower half of the troposphere, so I think he may already be a Tropical Storm.

The second Blobette is north of the potential-future-Julian and east of Bermuda. She does not have as much convection (mostly cloudy) – again because of dry air. Her circulation is not as robust either, so we have a little more time. If she continues to develop, she will be future Kate.

That’s it for today, but tomorrow I’ll be following with great attention the track that Ida takes.  And it’s the weekend so there may be more than one update per day!

Wishing all my northern Gulf readers well in their preparations!

Tsunoda starred for AlphaTauri on debut in Bahrain last month as he fought through to ninth place, but endured a more challenging second...
Read more