It’s a weekend, so of course Mother Nature is out partying with a few storms here and there! And as it’s the weekend, I had a French Lunch (i.e. any lunch which involves red wine :-)).

Ida has slowly got stronger, which was expected after she cleared Cuba because of low wind shear, generally humid air, and warm sea surface temperatures. The NHC currently peg her as a strong cat 2 hurricane with winds of 105mph, central pressure of 976mb (cat 2 range: 96 – 110mph). I would agree with this cat 2 status because she has an eye (so the winds are stronger than 90mph), but it is fluctuating in size and strength so she’s not quite at the major cat 3 or higher level. Here are the visible, infrared, and water vapour satellite images so we can see what is going on. From the visible, we see that the eye is not very clear yet, although it is there, and that this storm is covering the entire eastern half of the Gulf of Mexico – she is quite large…

As a reminder, the infrared satellite images tell us how cold the tops of the clouds are, which means how strong the rainfall or thunderstorms are (see the <Science Alert!> and <Technical Alert!> double feature here for a full explanation). So, from the infrared, we see that although there are some clouds over the northern Gulf and Florida, a lot of it is just cloudy with some lighter bands of rain (blus/green). There is heavy rain and some thunderstorms (yellow/orange/red) over Georgia, Texas, and along southwest Florida and Cuba, but the bulk of the really heavy rainfall and strongest thunderstorms (red/dark red) is still offshore. We also see that the convection is not evenly spread around the eye yet…

From the upper atmospheric level water vapour, we can see that the air is humid around the eye and the storm in general, however there appears to be a little drier air being pulled in to her south from the southwest side of the storm…

From the lower atmospheric water vapour, we can see that drier air a lot more clearly…

And from all of these images, we can cross-check that the center is where the current forecast track shows (and it is right on track)… she is at 26.3N, 87W heading NW at 16mph. Landfall is expected tomorrow afternoon, which is the 16 year anniversary of Katrina in that part of the world. 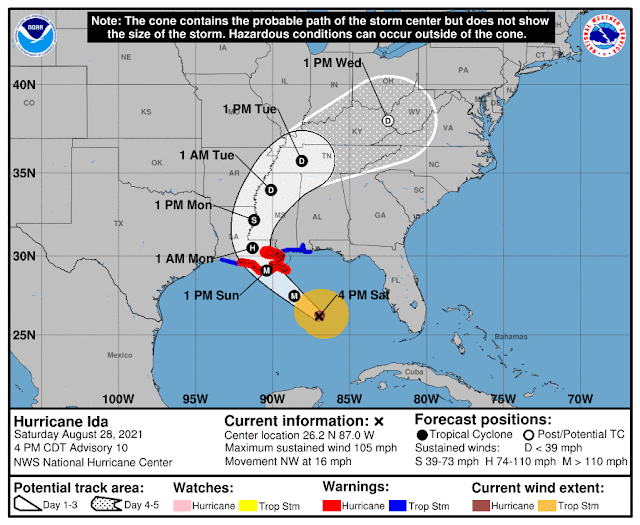 Generally, she has been staying to the eastern edge of the Cone of Uncertainty for the last 2 days instead of along the center, so her track after leaving Cuba has been on the eastern edge of the Loop Current, which is why she hasn’t intensified as quickly as they thought she would. As a result, the NHC have downgraded her winds at landfall from 140mph to 130mph – from a mid-size cat 4 to barely a cat 4/borderline cat 3 storm (cat 4 range: 130-156mph). The Loop Current map (the depth of water warmer than 26 deg C) is… 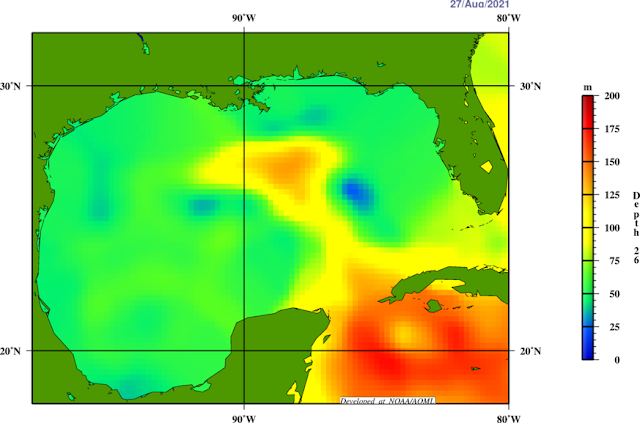 Although she’s been on that eastern side of the ‘yellow’ sliver, she is about to cross over the patch of warmer water that looks like an inverted triangle in the northern Gulf (a Loop Current Eddy). It will take her a few hours to cross this region (unless she speeds up), which means she will continue to get stronger until the early hours of tomorrow morning (unless that dry air from the south really manages to get a foothold).

Her circulation (vorticity) is very strong in all levels of the troposphere. Here is the vorticity map at 850mb (lower level):

You can see Ida has a good signal in all levels, including at 200mb, which means she is clearly a hurricane and given how robust that is at that high altitude, she’s a cat 2.

For those who are in the northern Gulf, where she makes landfall is important for storm surge.

<Science Alert!> Storm surge is water rising along the coastline as a storm approaches and makes landfall. How high the storm surge is depends on a number of factors:

1. Storms are low pressure systems, which means that there is low atmospheric pressure. But obviously we don’t have a “gap” between the air and the ocean (which are both fluids – one gas and one liquid), so the water ‘rises’ up to fill that ‘gap’ which is created by the low atmospheric pressure. So the stronger the storm is, the lower the central pressure, the greater the ‘gap’ for the water to rise to ‘fill’.

2. Storms are low pressure systems, so in the northern hemisphere they rotate in an anticlockwise direction.  This means generally water will be pushed onshore on the eastern side of the eye, and will be pushed off shore on the western side. Storm surge will be higher on the eastern side. In this case, if Ida makes landfall to the west of the Mississippi Delta, she will push water up the river and towards New Orleans as well as along the coast.

3. Speed of the storm. If a storm is moving quickly, then there is simply less time for water to get pushed onshore before the storm has swung by. Storm surge is greater for slower storms.

4. Angle of storm approach to land. Depending on if a storm is approaching land directly or at an angle can affect the amount of storm surge because of the direction of the winds. Storms that are heading directly onto shore result in greater storm surge than those that are approaching it from an angle – skirting along the coastline.

5. Shape of coastline (bays etc). Water can get piled into bays and upstream in estuaries of course.

To monitor storm surge, use NOAA’s tidesandcurrents website (instructions for this website are in the <Technical Alert!> in this post). At the moment, I see storm surge of around 0.5ft in parts of the northern Gulf/Louisiana region.

Be safe out there – listen to your local emergency managers because each area is different!

And remember to eat the ice cream first in case the power does go out….

I won’t say much more about these until they are named.

Great Ocean Road, Australia Head west from Melbourne on this coastal drive to see everything from the famous 12 Apostle rock formations, to koalas in...
Read more

“Life is too short to have boring hair.” Hair by: @mimizainhair . . #blond #hair…