Hurricane Iota officially made landfall as a borderline cat 4/cat 5 storm with winds of 155mph near the town of Haulover, about 30 miles south of Puerto Cabezas and just 15 miles from where Hurricane Eta landed only 13 days ago as a cat 4 storm!

The storm has already started to weaken – we can see that the eye is smaller and the convection (which is still strong enough to spawn tornadoes) is weaker than a few hours ago. 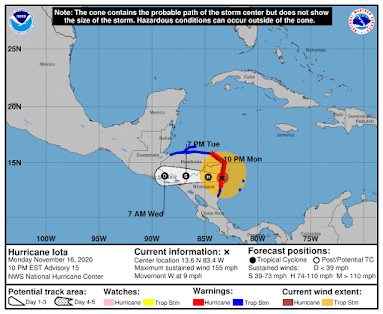 It will remain a hurricane as it crosses Nicaragua, becoming a Tropical Storm as it gets closer to Honduras tomorrow evening. We won’t know the full extent of the damage, but I will stop by tomorrow with an update. What an awful mess this is going to be though!

DISCLAIMER:
These remarks are just what I think/see regarding tropical storms – not the opinion of any organization I represent. If you are making an evacuation decision, please heed your local emergency management and the National Hurricane Center’s official forecast and local weather service announcements. This is not an official forecast. If I “run away, run away” (Monty Python), I’ll let you know.
————————————–