And here’s Ida! It was a busy Thursday (still practicing at trying to get the hang of those!… and Wednesday is the new Thursday, so it’s like two Thursdays in a row!) so I’ll jump into the fray.

Ida is now in the Caribbean, but she was one of three tropical depressions in the Atlantic (the other two are still out there by the way – the circulation for both suggest that they are close to Tropical Storms, but not quite there yet). She was upgraded to Tropical Storm status just a few hours ago and currently has winds estimated to be around 40mph, central pressure 1006mb, which means she is a very weak Tropical Storm at the moment. Although, she does have a lot of rainy and thundery weather:

For such a weak storm, she is quite large in her coverage – from the northern Caribbean to the south, and along the entire length of Cuba. However, structurally she isn’t very well developed at the moment. The water under her is warmer than 29 deg C at the surface and the upper 150m of the water column under her is warmer than 26 deg C. This would help her to intensify, but there is quite a bit of wind shear so her lower level circulation is a little west of the circulation at higher altitudes – and the heavy convection is to the eastern side of the storm. She is already interacting with Cuba (a toot) and dumping a bunch of raindrops over that island. 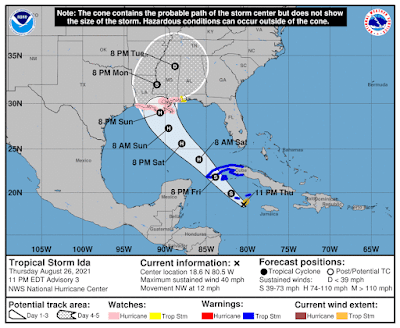 The track takes her over the tip of Cuba tomorrow. Now, looking at the satellite imagery and the location of this storm on the map, I am not quite convinced that the center is where they think it is – this is the sign of a weak storm… it is a bit tricky finding a center. To me, it looks like she’s a little more to the north and a smidge to the east compared to the track map, but they will be sending in a plane tomorrow to get better data. If she is a little north/east, that track may shift to the east but it will also change her intensity and she may not be as strong at landfall as the NHC think (currently, they think she will be a borderline cat 2/cat 3 storm at landfall).

Although all the models are currently saying a Louisiana landfall, I’d say that the entire northern Gulf from the western edge of that Cone of Uncertainty and east to Appalachicola should get ready just in case (you don’t want to run out of ice cream!), and we’ll see if they have a better fix on the location tomorrow.

I’m off to visit the Sandman now, but tune in tomorrow for the next installment.

Fed’s Barkin sees higher inflation this year, but a reversal in 2022