While the major championships have been the domain of the Big 3 — Novak Djokovic, Roger Federer and Rafael Nadal — for so long, in recent years the Nitto ATP Finals has proven to be a happy hunting ground for the sport’s younger stars. Alexander Zverev (2018), Stefanos Tsitsipas (2019) and Daniil Medvedev (2020) have all made their big breakouts as champions of the season finale.

And it’s no different this year, when, at the end of a thrilling 2021 season, Medvedev and Zverev will square-off once more at the Pala Alpitour in Turin in a blockbuster title match.

Their 12th ATP Head2Head meeting comes only five days after the Russian’s 6-3, 6-7(3), 7-6(6) victory over Zverev in the Red Group at the season finale, when Medvedev explained how his “hands were shaking”. Afterwards Zverev said: “I still have a chance to win the tournament and this is what I’m thinking to myself.”

Tennis fans will be hoping for the same quality on Sunday when both Medvedev and Zverev aim to capture their sixth tour-level titles of 2021.

Medvedev is 9-0 at the Nitto ATP Finals since his 0-3 debut in 2019. He would be the first repeat champion since Djokovic swept four straight titles in London from 2012-15. As part of that run, Djokovic won 15 consecutive matches.

On Sunday, Zverev will attempt to repeat his 2018 feat of overturning a defeat in the round-robin stage to the player he faced in the final. At The O2 in London, the German avenged his round-robin loss to Djokovic with a 6-4, 6-3 victory in the championship match for the biggest title of his career.

While Medvedev may have the psychological edge having won their past five matches, Zverev arrived in Turin insisting, “I didn’t come here just as a participant, but I want to win matches and do well here.” With Medvedev beating Zverev by such small margins on Tuesday, arguably the confidence the German gained in defeating World No. 1 Djokovic 7-6(4), 4-6, 6-3 in Saturday’s semi-finals may be a key factor in breaking Medvedev’s streak.

Medvedev, speaking after his 6-4, 6-2 win over Casper Ruud in the semi-finals, admitted, “Sascha [has a] big serve, big shots. Quite the same forehand, backhand. [He is an] all-around player. Runs well, he hits well if he has an easy ball to play. [He is a] complete player, knows how to do everything. [A] great serve, great returner.” 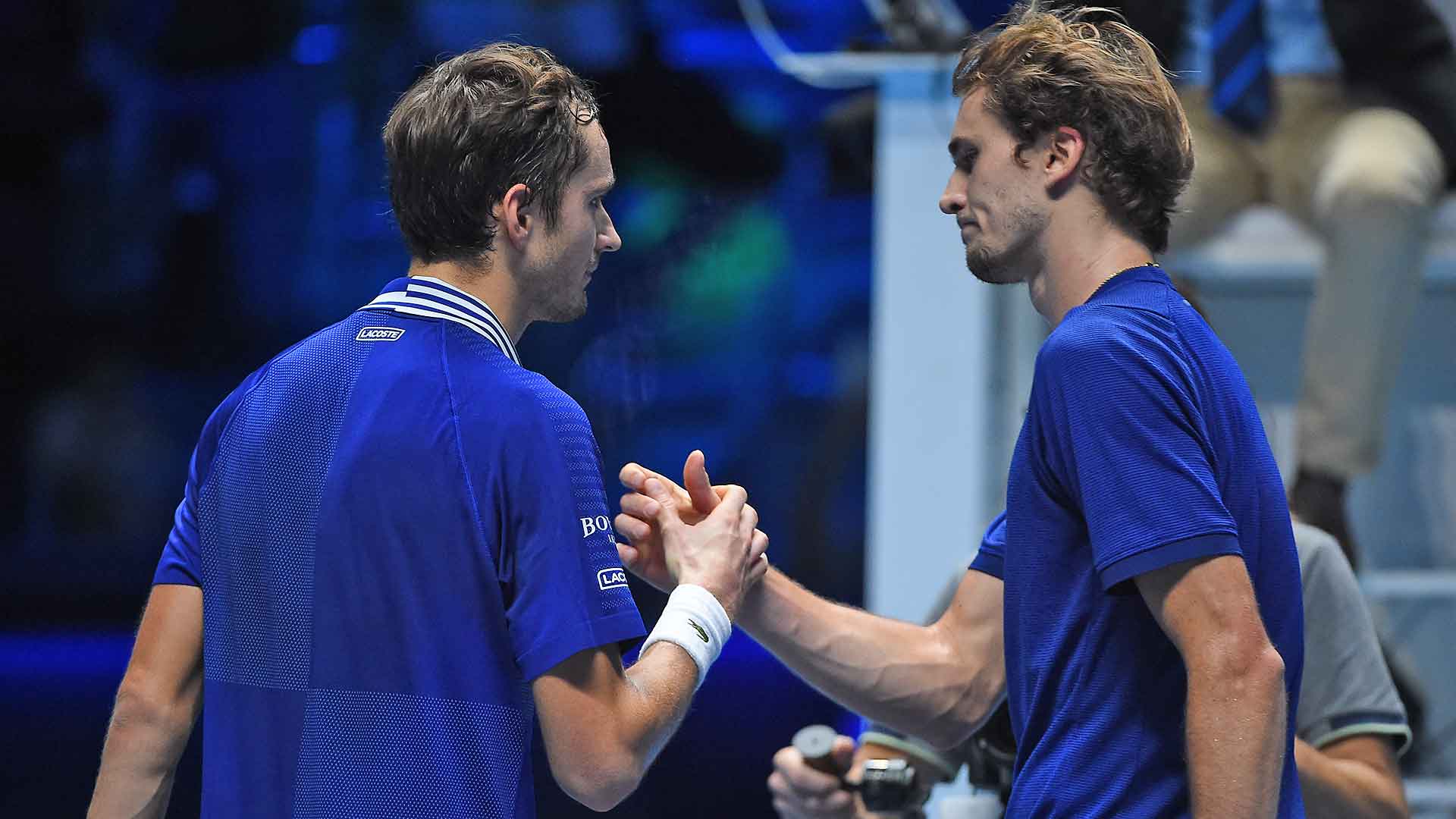 Incredibly, Medvedev and Zverev have also both recorded an ATP Tour-best 58 match wins ahead of their fourth clash at the Nitto ATP Finals. Medvedev experienced a high in winning his first major at the US Open (d. Djokovic) in September, while Zverev also beat Djokovic en route to the Tokyo Olympics gold medal (d. Khachanov) in August.

Zverev has compiled a 31-4 match record since the Olympics and is looking forward to Sunday’s clash. The German admitted, “I lost 8/6 in the third set in the group stages [on Tuesday], so I’m just looking forward to the final as I think it will be a great one. Outside of the Slams and the Olympics, this is the biggest tournament in the world.

“It features the best eight players and is difficult to win. I’m looking forward to having another chance [against Medvedev]. He is one of the best players in the world right now, so it’s going to be a difficult match no matter what.”

As snow and ice continued to wreak havoc across the U.S. into Saturday night, a third of the U.S. was bracing for wintry weather,...
Read more

This morning CoScreen, a startup that helps teams share screens and collaborate in real-time, formally launched its product to market. It also disclosed...
Read more