Nike Swim is dipping its toes into sustainable swimwear with the launch of the Icon Collection, the swim brand’s first sustainable line.

“We know that it’s kind of table stakes at this point to have sustainability in your product. But for this [line], we did kind of take it to the highest level across the entire collection,” Brianna Showell, vice president of marketing at Nike Swim, a division of Nike Inc., told WWD. “That’s one thing that we’re really proud of.”

She’s referring to the men’s and women’s swimwear collection that’s made with 85 percent or more sustainable fabrics and trims, including recycled lining and jerseys. 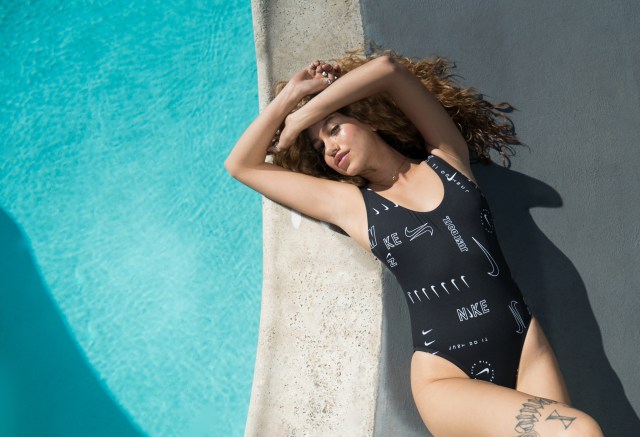 The introductory assortment, consisting of about 25 pieces, includes one-piece bathing suits, midkinis, two-piece separates and men’s trunks in splashy neons, color-blocked cutouts and Nike logo patterns. It looks a bit more like streetwear than beachwear for some. But Kelly Hibler, president of Nike Swim, said that’s the point.

The collection isn’t just for swimming, he said. It’s for “in-and-around-the-water” activities.

“You want to be able to wear what you have, and sometimes that means I’m going to wear it to the beach, and when I get to the beach, I want to take off my sweatshirt and go dive in the water and I don’t want to worry about changing,” Hibler said. “And sometimes I want to leave the beach and be able to go to a place to sit outside and have something to eat, and talk about the day spent in motion. So swimwear is a fun way to be able to connect through consumers’ lives that way.” 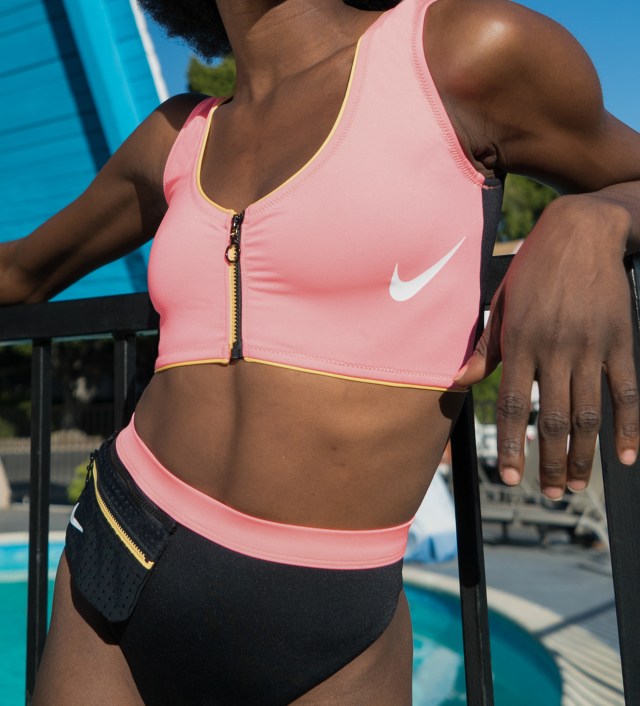 Meanwhile, all of Nike Inc. continues to grow, despite the pandemic and the recent political storm in China over Xinjiang cotton. Nike Swim executives wouldn’t comment on the situation abroad, except to say that “Nike Swim is committed to growth in Asia,” Hibler said. “While still in its early stages, we see it as a future accelerant to our business.”

But Nike Swim is just one of many swimwear brands that had record sales during the course of the pandemic. In fact, the business is on track to have its best year ever. In the last 12 months, sales in the Nike Swim North American business surged 36 percent, year-over-year, while the women’s division jumped 17 percent during the same time period. Globally, Nike Swim revenues are expected to be up 30 percent, year-over-year, for the period between June 2020 and May 2021.

“COVID-19 has really awakened people’s desire to get back in the water,” Hibler said. “And when you think about that — just the difficulty of buying Nike Swim is hard [because stores were temporarily closed.] And that’s also during a time when most pools have been closed, and lockdowns. But people have found a way to keep water as part of their life and that’s super exciting.

“Much of the growth is from nearly doubling the business in Europe, including new distributorships and current partners broadening their assortments, adding the new men’s and women’s Icon line,” he continued. “The Icon line opened opportunities with new retailers.

“We have a continued focus on growing the women’s business,” Hibler added. “We know our female consumers demand both performance and style and we are committed to serving them across our product line. The Icon line specifically addresses our target consumer’s love for sport-inspired bold swim style.” 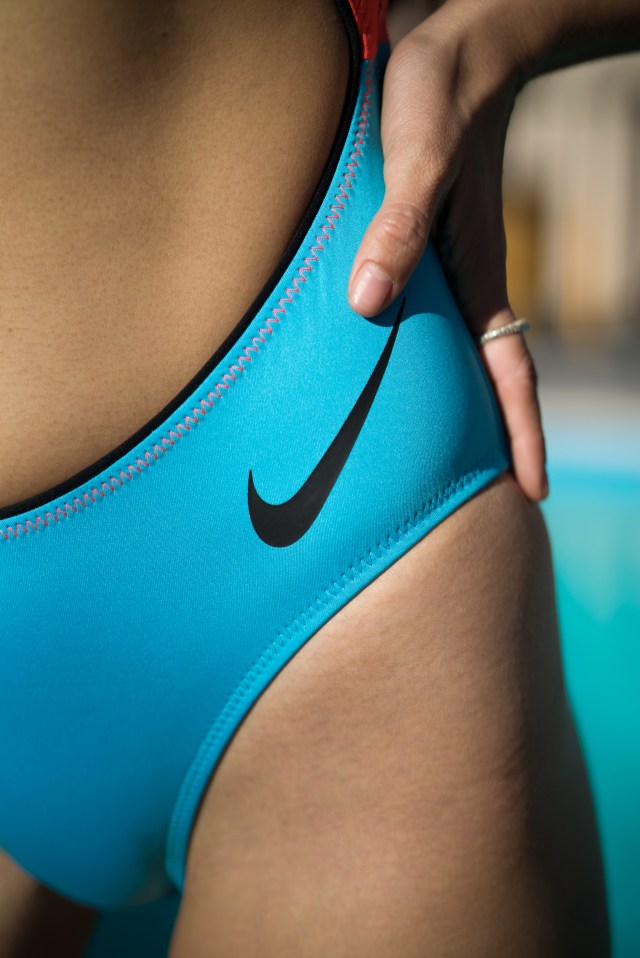 The collection is also geared toward the “Phenom consumer,” or 18-to-25-year-olds, slightly younger than Nike’s regular clientele.

It’s that consumer, Showell said, shoppers that are often grouped in the Gen Z category, that is increasingly concerned with social topics, such as sustainability and inclusivity — and is willing to pay for it.

“What is important to them is really the transparency and authenticity in both the actual creation of the product, but also in the marketing [and] equality, around inclusivity, health and wellness, sustainability and really just their love for street style,” Showell said. “They’re young, creative, ambitious, forward-thinking trendsetters and we really wanted to serve their needs with this collection and [go] a little bit younger than we had in terms of our design inspiration.” 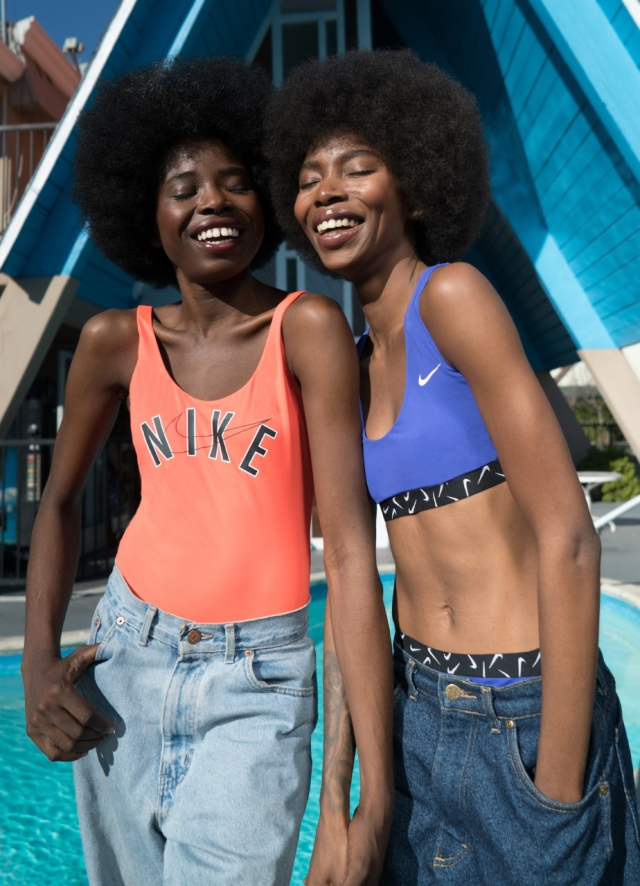 Kelly Hibler, president of Nike Swim, said the Icon Collection isn’t just for swimming. It can be worn as street style as well.
Courtesy Photo

Nike Swim, which is licensed and developed by Perry Ellis International, Inc., is offering the Icon Collection in sizes XS to XXL. Prices range from $40 to $80. The collection launches in the U.S. today at Nike stores, as well as internationally at nike.com, rolling out to other brick-and-mortar retailers later this month, including Asos in June.

How to Watch, Nominees, What to Know – WWD

Norman Norell to be Celebrated in His Hometown – WWD

Check out all the places seen in this video: https://www.touropia.com/best-places-to-visit-in-canada/ Awe-inspiring scenery, vibrant cities and a welcoming atmosphere all make Canada a popular tourist destination....
Read more

What do you do when you’re a skater who lives in a mountain town who can’t shred the pavement because it’s littered with...
Read more

Vinicius stepped up at a time he wasn't supposed to be on the pitch, involving himself in his side's opener Real...
Read more

revolve air is a foldable wheelchair that even fits cabin baggage

a wheelchair that revolutionizes travel for its users. that’s what andrea mocellin envisions with the ‘revolve air’ foldable wheelchair. combining a safe and...
Read more