Link to this story below.

This did raise a few eyebrows.

I have a brother who lives in Greece and I kind of liked using his alphabet for Xtra Hurricane names that manage to sneak in under the wire in a busy season. It was kind of fun I thought. Also Greek names often are names of muses and I’m very Pro Muse because well muses have rights too! But, alas the Greek Alphabet was pulled faster than bad guacamole at Chipotle’s menu! And somewhere along the line the powers that be chose a new list of names that are shown down below. I’m not saying they are not nice names but why Jacobus and Sophie made the list is beyond my pay grade. I’ve always been partial to Kappa and Mu myself, maybe put Mu back into the Pacific….  Sophie is a cute name, does that mean it will not not be on the regular list should a storm like Sandy be retired again or will they change this list next year? So many questions. Apparently “the committee” made the changes, sad because I’d love to have seen Sophie on the regular A Team List of names rather than the B Team List personally.

A look back at last year’s names.

Perhaps we should all submit names to “the Committee”

I’d vote for Sophie and Oscar

Anyway what is in a name anyway?

Something to think on…

Names have significance after the season is over.

Sandy was cute or reminded people of Aunt Sandy.

Sandy became a name that conjures up disaster…

A name to remember…..

Let’s see what other changes will pop up this year. 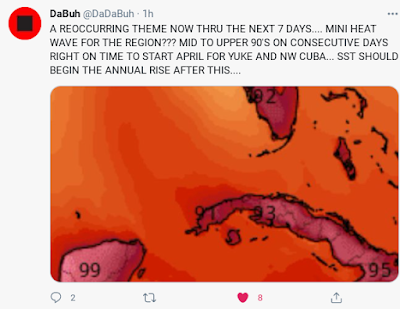 How is that even possible in March??

The truth is the most important thing for you to know and to do is how to properly prepare early for the 2021 Hurricane Season as the waters are warming up and when the heat is on … storms form early even before May 15th because things work according to Mother Nature’s schedule often not ours. People who really know what the main things to worry on and that’s actual development not names. It’s like when the Miami Dolphins went out to change the uniforms back to a retro look similar to the Undefeated Season, alas it’s about the team and their strength or weaknesses not the uniforms as they learned. What is in a name?

Alternative song for the day…

Link to the new names below, kind of surprised they didn’t just put them in the link above. What’s up with that?

Thoughts on the Tropics, the Sun and Waiting for Tropical Weather to Begin… in Less Than 30 Days!

Why F1 fought so hard for a race in Miami

The Anglo-Nigerians made key contributions to help Jonathan Woodgate’s men extend their winning run at the Den Dominic Solanke scored and...
Read more

A little over two years since the fire that devastated B’s Cracklin’ Barbecue in Riverside, pitmaster Bryan Furman announced his return to...
Read more

The record-breaking rally in small caps is long overdue for a pause, charts suggest

Do Probiotics Cause Gas, Stomach Pain & Bloating? Probiotic Side Effects

Keep in mind that limiting complex carbs and moderating the fiber in your diet will also help limit gas, especially when you’re adjusting...
Read more

I was interested in a time when there was a greater sense of wonder and optimism about the future,” Apparatus creative director Gabriel...
Read more