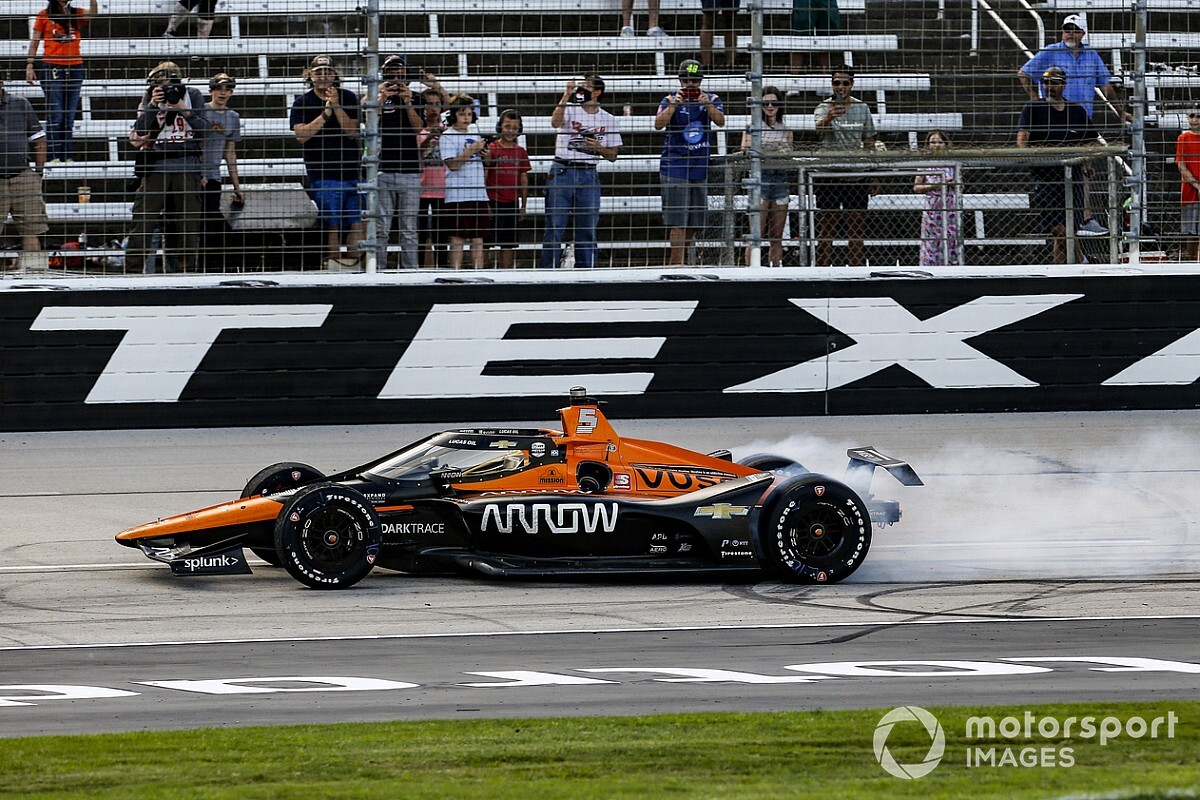 Due to when the caution periods fell, the last two stints saw drivers trying to fuel save, running some 10mph off their potential pace, while also ensuring their tires lasted throughout.

Newgarden was able to take the lead for the final stint when he pitted just as a yellow flew for Felix Rosenqvist’s Arrow McLaren SP shedding a right-rear wheel. With his main rivals slowed by the pace car, he was able to emerge ahead of O’Ward, whose crew had got him out ahead of the Graham Rahal vs Scott Dixon battle.

However, despite Newgarden trying to build a buffer over O’Ward, he couldn’t shake him and after the #5 Arrow McLaren SP had a look around the outside of the #2 Penske at Turn 1 on Lap 225, the 21-year-old Mexican tucked in behind and drafted Newgarden down the back straight and dived inside at Turn 3.

O’Ward then quickly pulled a one-second lead and eventually won the 248-lap race by 1.24sec.

O’Ward told NBCSN: “That was a long race but we had so much pace in this Arrow McLaren SP #5. We bounced back from last weekend, we showed we had pace yesterday and we got the job done today. I couldn’t be happier for our group of guys.”

Asked if he had expected his first IndyCar win would come on an oval, he said: “Honestly, no! But, hey, I’ll take it. It’s Texas, it’s close to my heart, I’ve lived here for many years.”

Said Newgarden, “I don’t know what it was. It seemed like his Chevy was a little better than my Chevy for some reason!” said Newgarden afterward. “At the end of the day, a Chevy won the race, so I’m pretty happy about that. Fuel mileage and reliability was key today and Chevy is always top notch on those qualities.

“Happy with that. I don’t know that we can be disappointed, but we were in the catbird seat there for sure but I just did not have the speed at the end. I dunno what was causing that, we’ll figure it out.”

Rahal, who had led for 13 laps after passing Dixon for the first time – but had then given it up as he needed to make fuel mileage – said: “I just got a little too loose on the last two stints. And it was hard to challenge near the end.

Dixon, who had looked set to dominate as he did yesterday, remarked: “It was tough and very confusing at some points, nobody wanted to lead. We had to back it down.

“Josef got lucky with the caution in the pits, and Pato did a good job – huge congrats to him.”

O’Ward has risen to second in the championship behind Dixon.