The pros and cons of living at the end of the road, mid-pandemic.

Just about 7,000 years ago, last March, I spent a couple of epic spring days at Colorado’s fledgling Bluebird Backcountry Resort. I’d just come off back-to-back hut trips and had months of touring ahead, including pow days at nearby Eldora Mountain and a trip to Slovenia’s Julien Alps. But things quickly fell apart. We skied with dread-spiked hope as the pandemic shut down the world around us like a slow-motion trainwreck. While we stood obliviously around a campfire, passing a bottle of whiskey and a unicorn-shaped bong, international travel was being canceled along with carefree germ swapping. Here, in Colorado, everything officially froze up on March 16th, when ski resorts and commerce as we knew it shut down. State leadership and the ski industry politely put the kibosh on backcountry skiing. And leaving the house became taboo.

This state of affairs revealed some intrinsic truths about skiing, now suddenly unavailable, and magnified every aspect of that ephemeral sensorial experience: from sitting in my van drinking coffee and struggling into my boots, to navigating wind-torn slopes, gnarly skin tracks and euphoric turns. Things, I realized, that keep me sane. I realized we’d all been reading and listening to others espousing the joy of skiing for so long that we stopped paying attention to the atmospherics and rituals and details around it in our rush for the endgame of skiing itself. Until it all came to a halt.

Thank the gods I’m fortunate enough to live in the middle of a National Forest, at the end of a dirt road, 9,000 feet above sea level. But my arriving, literally and metaphorically, at the end of the road was no accident. It was only after scraping and starving my way through the past 30 years of ski industry work that I was able to attain a working “ski bum” status. And as the world shut down, being isolated and sequestered with my family in the mountains, with my quiver of skis and cozy kit, was about to pay fresh dividends.

Sure, I’d stay close to home. I’d happily self-isolate here at the end of the road while others cranked up their vehicles and headed out to sneak laps and crowd mountain passes. Every morning, as the sun was coming up—after leisurely preparing flasks of hot chocolate and whatever else I wanted, jamming my feet into warm Scarpas, selecting the most advanced performance ski apparel, carefully cared-for skins, the best backcountry ski pack, the most high-tech storm shells, the latest helmet and goggles—I exited the house on yet another solo mission.

Yet, somehow, as I skinned up routes in my extended backyard, I felt lost. Here I was, having finally reached ski-bum nirvana, on my own glorious turf, outfitted in the greatest gear to ever exist… but I felt like I had nowhere to go. I keenly felt the absence of the buddies, the partners-in-crime, the co-conspirators who always elevate my adventures. The camaraderie we bring, enjoying the silence and then cracking it wide open with joy and laughter, was gone.

Before, when you returned to your car after a solo mission, the lure of human interaction drove you to hit the coffee shop, the bar, the grocery store, the ski shop or your buddy’s house. Or perhaps a share on social media. All of it, enjoyed together in some way. What does skiing mean in isolation, without anyone to share it with, when the color of your jacket truly does not matter?

I made it through the mad rush on the outdoors this summer, when every weekend the trailhead at the end of our road was busier than the last. And now, sitting here again with a foot of snow on the ground, looking around my backyard playground, I keep pondering what winter is going to look like, what skiing really means as we face another season with the pandemic gorilla on our backs. And I keep coming back to the rituals of the sport that drew me here in the first place. Those are all I need to know that skiing is important. 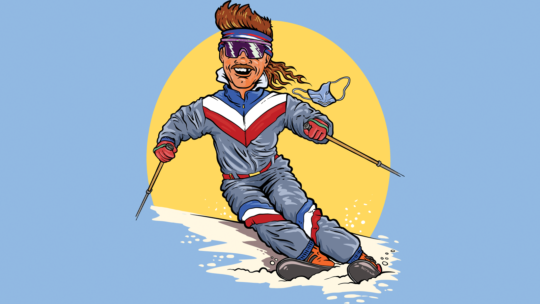 Three finalists have been selected for the 15th annual Dr. Tony Ryan Book Award from more than a dozen quality submissions published in...
Read more

It is safe to say Matteo Berrettini will remember his first appearance at The Queen's Club. The Italian...
Read more

Are you ready to ditch your quarantine sweats?During the pandemic, conventional beauty standards have noticeably relaxed: People have ditched makeup in favor of a bare-faced look, and loungewear...
Read more