The five caricatures you can expect to see on the hill this year.

Dear sweet lord of snow and spread eagles, ski season approaches. Every fall, when the leaves start to turn ablaze and the air is filled with the aroma of pumpkin spice lattes, I—like all skiers—salivate in anticipation of frosty wiggles, creamy schmears and all things schlooshing-related. Simply, I love skiing and I am so excited for the lifts to start a-turnin’. However, this ski season is going to be, cough cough, different. Everything typical about winter may seem a little off, including our fellow skiers, so please be on the lookout for these (mildly) exaggerated visions of wigglers you might see on the ski hill this season.

This flag-toting Kyle or Karen has hijacked words like “tyranny,” “liberty,” and “justice,” and uses them while misinterpreting and cherry-picking passages from the Constitution during unmasked rants outside the ticket window about conspiracy theories they read on the Internet. Resort guidelines created to ensure public health really bunch up this skier’s long johns because they’re infringing on their God-given right to be a selfish, privileged dickalope. They’ll let you know that they’re pro-life (except for the 200,000-plus lives lost to the coronavirus) and that they comply with seatbelt laws and “No shirt, No shoes, No service” signs but masks and social distancing are different because science is dumb. That’s not a goggle tan you see, that’s their red-faced misguided rage.

This skier is incredibly nervous to be out of their home, and by nervous I mean they’re sweating more than a microwaved hot dog. Their head is on a swivel constantly looking for anyone entering their personal 30-foot bubble of perceived safety, which would be a human-sized plastic gerbil ball if they could find one. They’ll be holding their ski poles like Leonardo the Ninja Turtle holds his katanas, ready to defend their social distance. This skier is never without two spray bottles of 409 slung to their belt like six shooters and will also be equipped with a bandoleer of Clorox wipes and a Super Soaker full of bleach. They will surely be masked, and by masked I mean double-masked, which is to say triple-masked. They might even wear one of those old timey metal scuba helmets. This skier will also look like me. It is me. I am this skier. I am nervous, so very, very nervous.

Aside from copping Juul pods and checking to see if mom and dad have Venmo’d their monthly allowance, there’s not much this skier is concerned with. Well, other than stackin’ footy with the boys and dranking ‘til the break of dawn. Sure, they’ve heard about the pandemic but it’s like, chill or whatever. They’ll wear a mask, but typically it’ll hang off one ear or look like a chinstrap because crushing hard seltzers is lit, bruh. Beanie sags, tall tees and Saga everything is the uniform for this skier. Not much of a personality but who needs that when you have abs and ab workouts to talk about. Just swipe right and keep on keepin’ on.

This skier will have an ever-present furrowed brow and look of disgust because they are permanently offended by everything ever. Don’t get me wrong; social awareness and fighting for social justice are absolutely necessary, but this skier wants to cancel every opinion that is contrary to whatever hashtag is currently en vogue. The only thing louder than this skier’s self-righteous indignation is their virtue signaling. Though often found jumping to conclusions in the comment sections of social media posts, this skier can also be found taking selfies at protest marches and centering conversations about the historic reckoning of racism and inequality on themselves. And yes, they’re a telemarker. How will you know? Don’t worry, they’ll tell you.

Hey, who is that skier over there; the one who is masked and following the rules, directions, guidelines, signage and all aspects of the pandemic operating procedures the resort spent months creating in order for us to have any chance at a ski season? This skier is cognizant of the fact that they are not the only one who wants to ski. They’re extra patient and gracious and doing everything they can to make sure they’re not jeopardizing the health and safety of themselves and others. It’s like they recognize the common good and the common goal of a ski season filled with smiles and fun for all. Holy hell, this human gives a shit about other humans. They must be a gosh darn superhero. Or maybe, they’re just the human we all need to be. 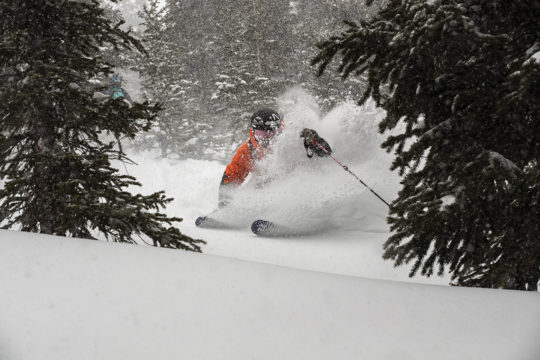