Who is the greatest player of all-time between Novak Djokovic, Roger Federer and Rafael Nadal? Djokovic was understandably asked that question after beating Matteo Berrettini on Sunday in the Wimbledon final to win a record-tying 20th Grand Slam title.

“I consider myself [the] best and I believe that I am the best, otherwise I wouldn’t be talking confidently about winning Slams and making history,” Djokovic said. “But whether I’m the greatest of all-time or not, I leave that debate to other people. I said before that it’s very difficult to compare the eras of tennis.

“But I am extremely honoured to definitely be part of the conversation.”

The World No. 1 has won the season’s first three majors, and he is now a US Open trophy away from becoming the second man in the Open Era to claim the calendar-year Grand Slam (Rod Laver, 1969). But the Serbian superstar was not always this dominant.

Djokovic lost seven of his first 13 Grand Slam finals, with all of those championship-match defeats coming against Nadal (4), former World No. 1 Andy Murray (2) or Federer. He was unable to push any of those seven losses to a fifth set.

“I lost quite a bit of finals at Grand Slams where I felt like I was close to winning, but then I folded,” Djokovic admitted. “As Michael Jordan used to say, ‘I failed, I failed, I failed, and that’s why I succeeded in the end.’”

The 34-year-old has greatly improved his mental game, which has been virtually impenetrable in the biggest moments in recent years.

“I felt like from 15 years ago to today, the journey that I’ve been through has been very rewarding for every segment of my game and also my mental strength. [I have gained] the experience [and the] understanding of how to cope with the pressure in the big moments, how to be a clutch player when it matters the most,” Djokovic said. “That’s probably, if I have to pick one, the one that I would point out as the highlight of my improvement in my assets… Just the ability to cope with pressure.

Djokovic revealed that the “constant battle” he has on court is to stay present and not let his mind wander to points or critical moments in the past, or to drift into the future and what could come. During Sunday’s final, the Serbian had the weight of a historical chase on his shoulders, and he let slip the first set to fall behind Berrettini. But he never panicked, and showed few emotions until the fourth set, when the match was well in hand.

“I feel like if you’re constantly divided between [the] past and future, it’s difficult to keep the quality of tennis that you really want,” Djokovic said. “That’s usually when players get tense [and] fold under pressure. It happens to me. Of course, I’ve been very fortunate to be so strong in the decisive moments of the biggest tournaments throughout my career.” 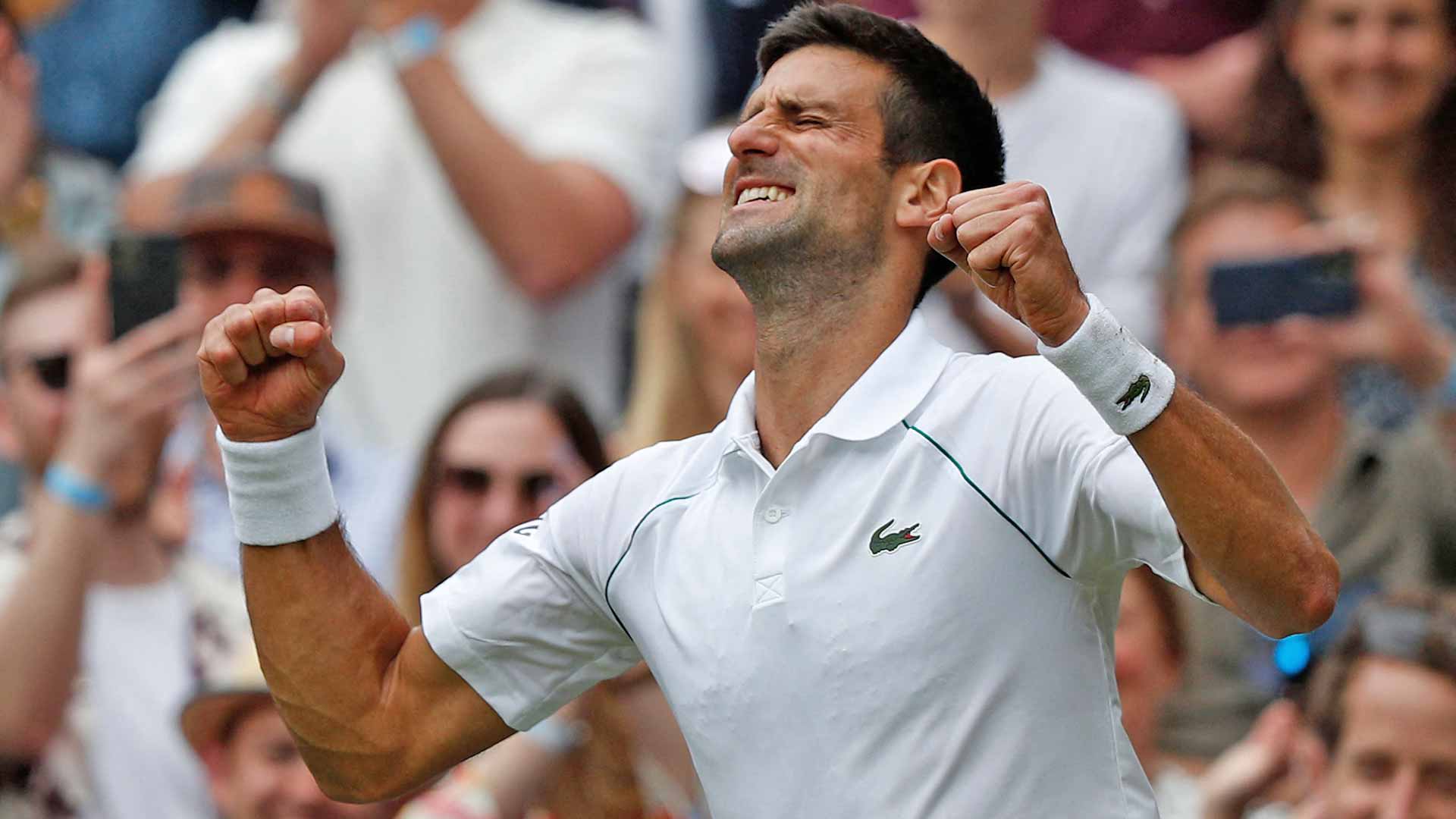 Novak Djokovic” />
Photo Credit: AFP/Getty Images
After going 6-7 in his first 13 Slam finals, Djokovic has since tallied a 14-3 record with major trophies at stake.

Because of his success, Djokovic inevitably is asked about his pursuit of history at every tournament he plays. Earlier this year, the Serbian broke Federer’s record for most weeks at World No. 1, and now he has tied the Swiss and Nadal atop the Grand Slam titles chart. But even Djokovic was not always certain he could reach this point.

“I probably started thinking about trying to reach the record of most Grand Slams won, most weeks at No. 1 historically, about two to three years ago. Before that it seemed a little bit out of reach,” Djokovic said. “I’ve always believed that I could play my best tennis in Grand Slams and give myself a good chance to win any Slam on any surface because I know what I’m capable of. I know I have a very complete game that has proven to be successful on all surfaces in the past.

“But only [in] the past two-and-a-half, three years I started to realise that I can actually reach the weeks at No. 1 [record], which was my primary goal in the past two years, and also [the] Grand Slams mark.”

Djokovic said that he is “50-50” on going to the Tokyo Olympics. But either way, the 85-time tour-level titlist knows he has a chance at joining Laver as the second man in the Open Era to complete the calendar-year Grand Slam in less than two months. The 34-year-old has won eight of the past 12 majors he has played, and will be the heavy favourite at Flushing Meadows.

“Obviously it’s all coming together,” Djokovic said. “For me, age is just a number. I’ve said that before. I don’t feel that I’m old or anything like that.

“Obviously things are a bit different and you have to adjust and adapt to your phases you go through in your career. But I feel like I’m probably the most complete that I’ve been as a player right now in my entire career.”

That is a scary statement for the rest of the players on the ATP Tour.

Suspect in Atlanta shootings turned in by own family | USA TODAY