The Salvation Army is being sued for failure to pay minimum wage for the work required by rehab program participants — and the suit is shedding a light on labor practices in charity thrift chains.

Filed in San Francisco Superior Court on May 7, the lawsuit challenges aspects of The Salvation Army’s century-old drug and alcohol treatment centers, or Adult Rehabilitation Centers, and hopes to see success within California’s strong labor protections.

It comes amid continued debate on whether to raise the minimum wage in the U.S.

“Ultimately they’re a nonprofit. They’re running thrift stores,” said Valerie Brender, a San Francisco-based employment lawyer who is working on the case. Hundreds of millions of dollars are made off of the nonprofit’s thrift stores every year, and donated goods that are sold in the thrift stores help fund the ARC program. “They’re running this very traditional retail operation. They don’t get a de facto protection when they’re operating a very standard business.”

The Salvation Army is the fourth largest charity in the U.S. by private support, according to Forbes charity navigator, taking in $3.3 billion from donations, investments, sales and other sources while competitor Goodwill Industries International took in $6.5 billion.

Across California, the nonprofit operates 15 ARCs, including centers in San Francisco and Oakland.

After acceptance into the free six-month program, individuals in the ARC program — many of whom are either homeless or court-ordered — are offered residential housing, and group and individual counseling, including Christian spiritual guidance like mandatory Bible study. The main element under scrutiny in the suit is a form of “work therapy” where participants “work for the Salvation Army 40 hours per week — and frequently more” sorting mounds of clothing donations, operating heavy machinery, moving furniture, performing janitorial services and working in the Salvation Army kitchen — all without wages as participants aren’t, technically, considered employees.

Calling the work therapy a “full-time menial labor job,” Brender believes they should be paid. The completion rate for ARC is relatively low, with only 17 percent finishing it in 2016.

The Salvation Army did not return requests for comment.

While some paid retail positions exist, Brender claimed the thousands of rehab program participants that cycled through ARCs in San Francisco —and across its over 100 locations in the U.S. — are entitled to minimum wage regardless of how long they were enrolled in the program.

Unfortunately, the Salvation Army is just one thrift charity that has been the subject of investigations into its pay levels.

By its marketing messaging, Goodwill aims to provide paying jobs and training. But a Depression-era loophole in federal labor law awards a special wage certificate to the tax-exempt nonprofit to hire people with disabilities at a sub-minimum wage if proven that the employee is less productive. The pay was sometimes as little as 22 cents an hour per Labor Department records, while Goodwill’s chief executive officer’s salary is more than $500,000 annually. 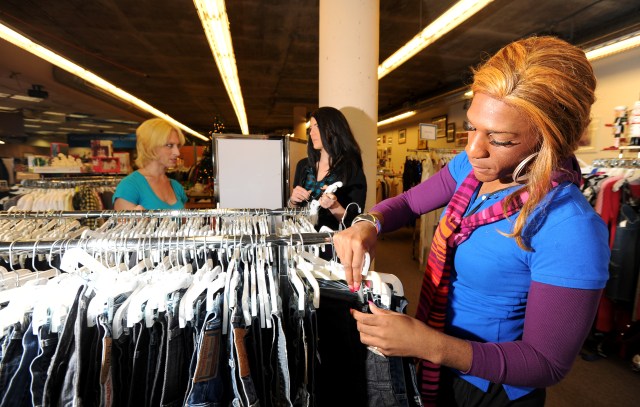 Octavia Williams arranges merchandise at the Castro Goodwill in San Francisco. She was referred to Goodwill by the Transgender Economic Empowerment Initiative, a nonprofit training and employment service.
ASSOCIATED PRESS

Goodwill has called the seemingly low pay distorted or “isolated incidences” in past statements, reiterating its job opportunities.

As the popularity of secondhand soars during the pandemic — are charity thrift chains benefitting from failing to pay their employees?

“Yes, I was not aware of this until we started investigating this case,” said Brender. “It’s something that is not at all publicized — not something that you would generally know. The Salvation Army has obviously done a lot of good in the world. Many would not question their labor practices…but it’s clear that they have been doing this for some time.”

Brender is not alone in this thinking. “In our experience, most thrift shoppers are unaware of labor exploitation within secondhand because they do not understand that the secondhand economy is a supply chain,” said Liz Ricketts, cofounder of the OR Foundation, a nonprofit that centers its research on secondhand clothing economies in Ghana.

Ricketts believes awareness of labor exploitation within major thrift chains is important in creating a more realistic depiction of the state of fashion.

Although she encourages shopping secondhand over new, Ricketts thinks “we need to remove the blinders we might have placed upon ourselves in the search for a panacea. When the whole industry is built on inequality and the devaluation of people and the planet, secondhand is not a utopia operating outside of these patterns.”

She added that “no amount of recycling technology is going to negate the need for intensive manual labor. If we fail to address the labor issues that exist across our current system of recirculation — how do we expect to build a justice-led circular economy?” 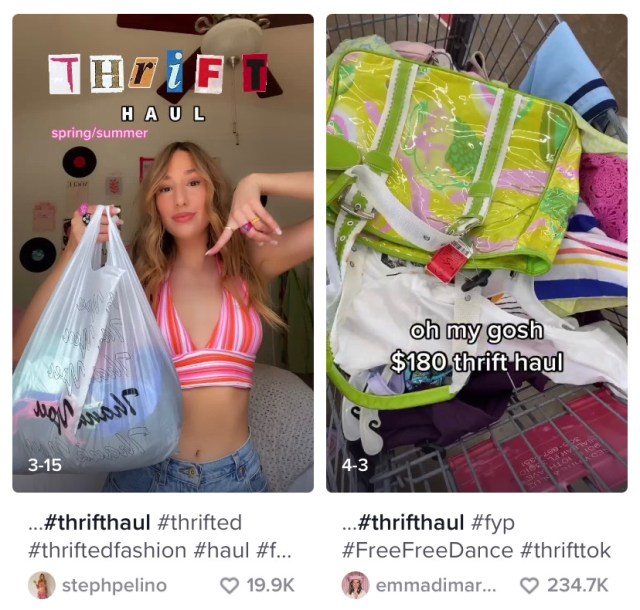 Thrift hauls have become a phenomenon on TikTok.
Courtesy

Malibu Moon  , the foundation sire of B. Wayne Hughes' Spendthrift Farm, died suddenly May 18 in his paddock of an apparent heart attack,...
Read more

In hindsight, Dayna Grayson and Rachel Holt didn’t have the best timing. It was late in 2019 when the two, both Washingtonians who...
Read more